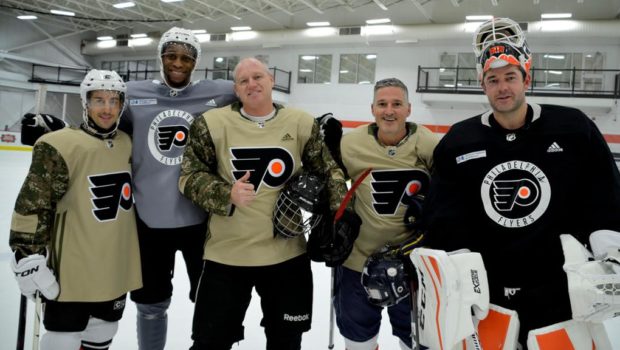 The Flyers rolled out the red carpet yesterday for America’s heroes!

In advance of Military Appreciation Night this Saturday night, which is Veterans Day, current Flyers Wayne Simmonds and Brian Elliott hosted a dozen members of the U.S. Air Force for an on-ice hockey clinic.

Also on hand were several Flyers teammates, including Taylor Leier and Matt Read. Flyers Alumni president Brad Marsh and Bob “the Hound” Kelly helped run the session on the ice.

Some of the Flyers players have military members in their families. For example, Elliott’s wife, an American, is in the military. Read comes from a Canadian military family. As excited as the Air Force members were to be on an NHL rink with current and past Flyers players, the Flyers and Alumni on-hand were equally excited by their guests’ presence.