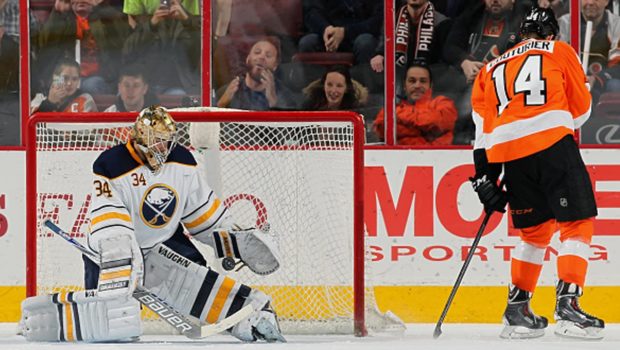 FLYERS TAKES THEIR STREAK OUT FOR A SPIN AGAINST SABRES!

Okay, the red-hot Flyers take on the Buffalo Sabres tonight at the Wells, and we will find out a lot about this up-and-down team.

The Flyers (12-11-7) have won four straight games since losing 10 in a row from Nov. 11 through Dec. 2, and they are beginning to look and like a playoff contender.

“I think our identity kind of changed a little bit with that road trip,” Flyers captain Claude Giroux said, referring to last week’s three-game sweep of the Calgary Flames, Edmonton Oilers and Vancouver Canucks. We’re excited right now in the room. We played a lot of good hockey games when we lost, but we didn’t get the results and now were playing some good hockey and we’re getting the results, so we’ve got to keep building on this.”

The Flyers outscored their opponents 17-7 in their last four wins and received goals from 10 different players, including three from fourth-liner Scott Laughton and two each from Giroux, Wayne Simmonds and Michael Raffl.

The Sabres (8-17-6) are coming off a 3-2 home win over the Ottawa Senators on Tuesday night and earned at least a point in a season-high four straight games (2-0-2). However, they have suffered through losing streaks of four, five and seven games during the first 31 contests of the season.

“We’ve got to build on it and keep the momentum,” left winger Benoit Pouliot told the Buffalo News.

Pouliot signed a one-year, $1.15 million contract with Buffalo last summer and is tied for third on the Sabres with eight goals, matching the total he had in 67 games with the Oilers last season. Buffalo is 6-0-1 when Pouliot has scored a goal this season.

“I just show up at the rink and try to play hard, try to play good and help the team as much as I can,” said Pouliot, who plays on the power play and penalty kill.

“The guys that I play with help a lot, too, and being in different situations in games helps.”

The Flyers will try to take advantage of goaltender Robin Lehner, who ranks 41st among NHL goaltenders in goals-against average (2.87) and 38th in save percentage (.911).

One of the big reasons for the Flyers’ turnaround has been their ability to stay out of the penalty box. During their four-game win streak, they have been short-handed just seven times.

“I think we’ve had the puck a little bit more and that’s probably the first place to look,” coach Dave Hakstol said. “We had a stretch where stick penalties were getting us and those kind of penalties happen when you’re chasing a game, when you’re defending a little bit too much and that was the case during that stretch. Usually that leads to fewer penalties against.”