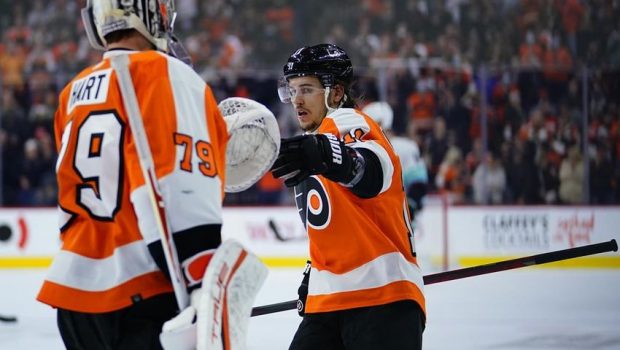 FLYERS TAKE KRAKEN AND COACH DAVE HAKSTOL TO THE WOODSHED!

The Flyers treated the expansion Kraken as dismissively last night as Flyers fans did their coach Dave Hakstol when he was Philly coach from 2015-2018.

“We were out of sync, we couldn’t put ourselves back on the right track,” Hakstol said. “And that’s the end result.”

Carson Soucy scored the first goal in four games for a Kraken defenseman in team history. The previous three were each decided by one goal.

Hakstol was hired by the Flyers in 2015 out of a college job at North Dakota and fired in December 2018 after he went 134-101-42, coaching the third-most games in franchise history behind Fred Shero and Mike Keenan – and the most for the Flyers without winning a playoff series.

“We’ve got a good group here. We have fun at the rink,” Hart said. “But we know when it’s time to go to work.”

Hakstol caught up with some of his former players at the morning skate and had brief conversations before moving on to prep his current team. Only three years later, just nine players remain from his final game in Philly.

“It’s different seeing him on a different team when you had him for so long,” Konecny said. “It’s pretty cool for him to have that job now and step in as a head coach again. Hopefully, it goes well for him, just not tonight.”

Giroux scored a one-timer off a give-and-go for his second goal of the season and Konecny buried one from the slot. Brassard scored his first goal as a Flyer off his own rebound, and soon the only thing expanding in Seattle was its deficit.

Ellis added his first goal as a Flyer on a shot that not even Shawn Kemp could block and it was 4-0 in the second. Braun made it 5-0 and chased Kraken goalie Philipp Grubauer with 11:11 left in the second.

“We’ve got a lot of great memories here and good friends, and obviously as you get to this time of day it kind of flips right to the competition of the game tonight,” Hakstol said before the game.

Hakstol moved to Toronto as an assistant and is now tasked with trying to move the needle in Seattle. The 53-year-old Hakstol was a surprise choice as Seattle’s first coach, at least to those outside the front office.

Hakstol always said he wanted to coach again, and the Kraken are counting on him to have the success he failed to find in Philly.