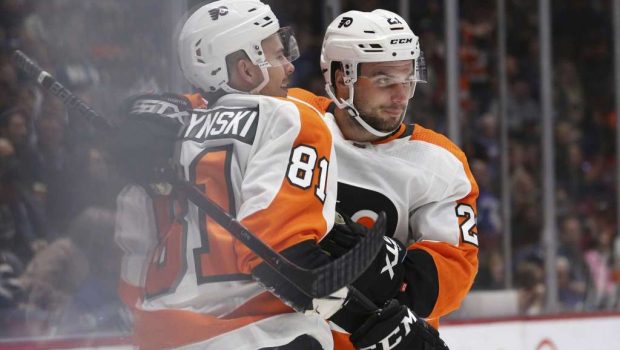 Tanner Pearson beat Flyers goaltender Carter Hart between the pads in the third round of the shootout, and the Canucks beat the Flyers 3-2 for their first loss of the season.

Hart, who stopped 24 shots, said he read the shot “the whole way” but made a small and costly mistake.

“I felt like I had it but my stick was a little bit off the ice and it just grazed the bottom of my stick, so I have to make sure I keep my stick on the ice,” Hart said.

Carsen Twarynski and Oskar Lindblom scored for the Flyers.

Despite the score in regulation, Hart said most of his work came in extra time.

“They came on in overtime, so it’s important you make sure you stay into the game, whether that’s little things throughout the game or looking at which way a guy shoots, or who is on the ice, making sure you keep your mind ready,” Hart said.

Jacob Markstrom had 29 saves for Vancouver.

The Canucks got on the board just over five minutes in after J.T. Miller picked off the puck behind the Flyers’ net. He got it up to Tanev at the blue line and the veteran defenseman fired off a long shot.

Hart made the save but Boeser was there to grab the rebound. His slap shot beat Hart and put Vancouver up 1-0.

The Flyers got the equalizer 3:14 into the second.

Justin Braun sent a cross-ice pass to Twarnyski alone in the Canucks’ end. The left-winger streaked toward Vancouver’s net, sending a shot past Markstrom on the stick side. Braun and Travis Sanheim earned assists.

The Canucks bounced back just over a minute later when Tanev collected the puck near the blue line and sent down a long shot. Pearson deflected it in from down low.

Philly came out strong in the third, peppering Markstrom with a barrage of shots.

One attempt by James van Riemsdyk looked promising, skimming through the crease before Markstrom, flat on his belly, got a piece of it with his glove and directed the puck out of harm’s way.

The Flyers outshot the Canucks 9-1 in the first five minutes of the third.

Lindbolm scored Philly’s second goal of night on the power play at 14:58 into the frame after Vancouver defenseman Jordie Benn was called for interference.

It was the first power-play goal the Canucks have given up this season.

“After the second we were a little frustrated with how we were playing and knew we could play better but there was no panic, we didn’t change our game, we kept the game plan and it was a big goal to tie it up,” said Flyers right-winger Claude Giroux.

Sanheim rang a shot off the post with about 50 seconds left, but the Flyers couldn’t avoid extra time.

Both sides had opportunities in overtime, including a great chance for Vancouver with just over a minute to go when Philly’s Sean Couturier lost his stick and Bo Horvat got a bit of a breakaway.

Horvat couldn’t burry the puck on the ensuing shot, but Couturier was called for throwing his stick, giving the Canucks a man advantage.