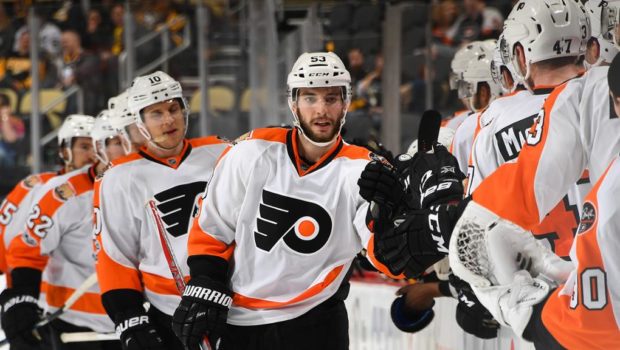 The Flyers inched closer to the second wild card into the Stanley Cup Playoffs from the Eastern Conference by defeating the Pittsburgh Penguins 6-2 last night in Pitt.

Philly (35-32-8) is six points behind the Boston Bruins. They Flyers and Bruins each have seven games remaining.

“You look at it one game at a time,” Flyers defenseman Shayne Gostisbehere said. “We win. It takes care of everything else. We just control what we can control right now. That’s winning games.”

Pittsburgh (46-18-11) remained tied with the Columbus Blue Jackets, who have one game in hand, for second place in the Metropolitan Division. They’re each three points behind the Washington Capitals.

“The reality is every team in the League is playing the same schedule,” Penguins coach Mike Sullivan said. “It’s not just us.”

Weal tied it 1-1 with 54.4 seconds remaining. Weal turned away from Oskar Sundqvist in the neutral zone, darted to the left circle and shot over Ian Cole’s stick blade and under Matt Murray’s glove.

“I’m just trying to go out every night and give it my best shot,” Weal said. “My game is to create opportunities offensively and spend as little time [in the defensive zone] as possible. I try to do that every night. Consistency is key.”

Filppula gave Philly a 2-1 lead with his ninth goal of the season at 12:49 of the second period. The goal was upheld after Pittsburgh challenged for goaltender interference.

Murray made 27 saves. He has allowed at least four goals in four of his past seven starts.

“They had the momentum pretty much the entire game,” Murray said. “For a lot of the time they were really swarming in our end zone. … Just one of those games that we didn’t get the bounces and things didn’t go our way.”

Penguins forward Conor Sheary left after playing 3:56 in the first period. Forward Tom Kuhnhackl took his place at left wing alongside center Sidney Crosby and Bryan Rust for the remainder of the first before Chris Kunitz took over to start the second period.

Sullivan said Sheary is day-to-day with a lower-body injury.