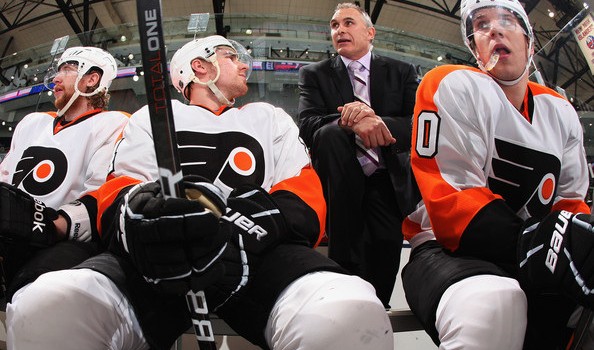 FLYERS JUST NOT A VERY GOOD TEAM, AND BERUBE'S NOT STRESSING

Craig Berube is the Flyers coach and his nickname is “Chief,” which is what media butt boys like the Daily News’ Frank Seravalli and CSN’s Al Morganti and Tim Panacchio call him on second reference.

That’s okay. They called failed general manager who has moved up to president Paul Holmgren “Homer”.

Very appropriate since these guys paint a picture of the Flyers that makes “Alice in Wonderland” seem realistic.

Leave it to NJ.com’s Randy Miller to tell it like it is, which he did in a recent story that talks about why the Flyers are still winless after four games:

1. OUTPLAYED ON 5 ON 5
The Flyers were a poor 5-on-5 team last season and so far this season they’ve scored six goals and allowed 12 playing 5-on-5 hockey. The Flyers thought they were addressing this issue during the summer by adding more speed, but thus far swapping Scott Hartnell for R.J. Umberger, signing Pierre-Edouard Bellemare out of the Swedish Elite League and adding Michael Del Zotto hasn’t paid off.

2. ISSUES ON DEFENSE
The Flyers will tell you that they like their defense, that they have confidence in their defense and that they can win with their defense. There are good pieces in place, but there are no legitimate top-pair guys and Luke Schenn and Del Zotto playing as the third pair has been a weak link. Defense issues have included bad positioning, too many mistakes and a bunch of scoring chances for opponents that shouldn’t have occurred.

3. TOUGH SCHEDULE
The Flyers lost their season opener in Boston to the Bruins, who won the President’s Cup last season for leading the NHL in points. They lost shootouts at home to Montreal, which played in the Eastern Conference finals, and Anaheim, which led the Western Conference in regular-season points. And that home loss to the Devils doesn’t look so bad now that they’re off to a 3-0 start with three road wins, the latest coming Tuesday in Tampa Bay.

4. INJURIES
Losing Braydon Coburn, the Flyers’ best defensive defenseman, has been a crushing blow because it’s forced Nick Schultz to go from being a healthy scratch to playing on the top pair. Schultz played pretty well for two games, but lost his man late in the second period Tuesday and Matt Beleskey ended up scoring 16.8 second before the horn for a 3-2 Ducks lead. The Flyers also played Tuesday without center Vincent Lecavalier, a big weapon on their top power-play unit. The Flyers power play did well without him, but their second unit played a lot immediately after the top unit scored a 5-on-3 goal in the second period and came up empty.

5. BAD THIRD PERIODS
The Flyers have showed resilency in rallying a lot thus far, but they’ve been outscored 7-3 in third periods. They were tied in the third in Boston and lost 2-1. They were tied 3-3 after two against the Devils and lost 6-4. They were up 3-0 on Montreal after two and lost 4-3 in a shootout. This pattern changed Tuesday when Flyers right wing Jakub Voracek scored the only goal of the third to tie the game 3-3. The Flyers need more of that in the future.