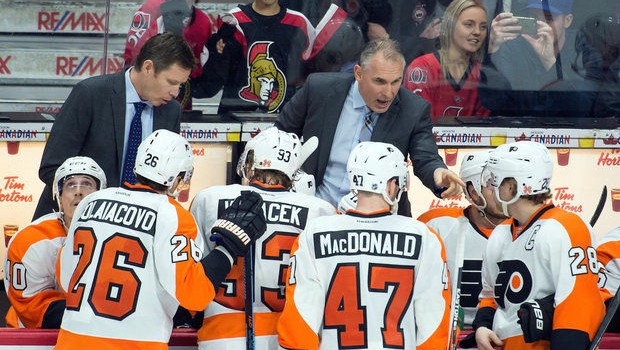 FLYERS’ STRIFE VISIBLE IN PLAIN SIGHT, AND OF COURSE THEY DENY IT

The wheels came off of the Flyers’ 2014-15 a long time ago, and it would take a miracle on ice for them to make the playoffs.

And now they are spending time denying a report about internal strife.

Coach Craig Berube (photo above) and goalie Steve Mason insist a Daily News report of Mason being blown off by Berube at the team bus following the Flyers’ 5-4 overtime loss in Edmonton on Saturday night was absolutely ludicrous.

“Nothing could be further for the truth,” Mason told Comcast SportsNet.

The alleged incident occurred Saturday after Mason pulled himself out of a start in Edmonton after warm-ups because he felt ill.

Mason said after the game that he’d been sick since the afternoon, but that he and Berube decided to see how he felt during warm-ups. When he couldn’t go, No. 2 goalie Ray Emery was forced to play with no prior warning, which was strange since Mason had been feeling ill for a few hours.

Mason told Comcast-SportsNet that he and Berube talked after Saturday’s game.

Daily News beat writer Frank Seravalli, however, wrote that he’d witnessed Mason waiting at the team bus to talk to his coach and then seeing Berube pass the goalie without saying a word.

Here’s what the Daily News reported:

“Craig Berube briskly walked toward the team’s bus, parked inside the arena, where goaltender Steve Mason was waiting near the door of the bus.“Mason attempted to engage in conversation with Berube, who instead shoved his briefcase into a storage compartment under the bus and turned and walked away, leaving Mason standing there.

“The entire sequence last less than 15 seconds, but if body language does indeed account for the bulk of our communication, it said just about everything to this reporter watching from afar.”

Berube shook his head in disbelief and let out a laugh when he was asked about the report.

“Honestly, I don’t care what’s written, I really don’t,” he said. “I can’t control that. Steve and I know (our) relationship, what’s there and how solid it is and what we think of each other. To me, that’s all that counts.”

Flyers GM Ron Hextall and Berube challenged the same reporter’s credibility over a March 6 Daily News article. That report alleged goaltender coach Jeff Reese’s mutual split with the Flyers on March 6 was due to a rift with Berube over Mason returning too quickly from Feb. 10 knee surgery.

Hextall’s only response came on March 7, “”There are inaccuracies being reported in regards to the Jeff Reese situation.”

Berube says that his relationship with Mason has grown since Reese’s departure because the Flyers opted to finish the season without a new goalie coach.

“The relationship changed since Jeff left because I need to talk to (Mason) more,” Berube said. “I like to let my assistant coaches do their work and obviously Jeff handled the goalies and talked to them all the time, so that’s (now) more on me.”