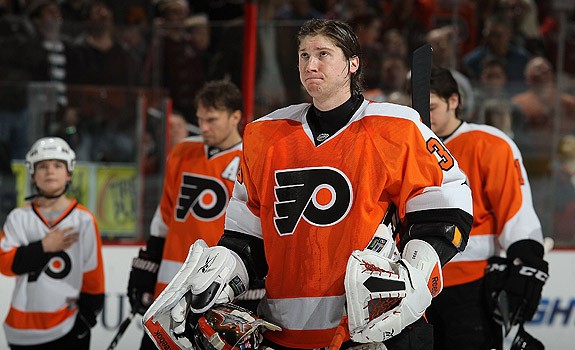 FLYERS STREAK STOPS AT 2, THANKS TO FORMER GOALIE BOB!

Sergei Bobrovsky stopped 34 shots for the Panthers, improving to 18-3-1 in his last 22 outings.

The Panthers toyed with the Flyers for the first 20 minutes, going up 4-0 with the final three goals coming in a span of 5:18. Both of Reinhart’s goals came off shots by Huberdeau — one was a redirection, the other was a blast that Hart saved but bounced into the air and ended up in the net after a baseball-style swing by Reinhart.

Verhaeghe’s goals were both from the right side of the high slot. It was the first time in nearly 22 years that two Panthers had multiple goals in the same period; on April 5, 2000, Ray Whitney and Ray Sheppard each had two in the second period of a 6-3 Florida win over Boston.

“Didn’t come out too great in the first,” Hart said. “They’re a good hockey team. We know that.”

But a big hit and bad outcome got Philadelphia going.

Philadelphia’s Scott Laughton carried the puck into the zone and got checked by Florida’s Petteri Lindbohm, a hard hit but one that looked clean and no penalty was called. Laughton wound up going into the boards and remained on the ice, obviously hurt. He wound up leaving the game with what the Flyers called a head injury and didn’t return.

Konecny went at Lindbohm — who was making his Panthers debut and his first NHL appearance since 2017 — after the play and both picked up fighting majors. That’s when the Flyers began hitting Florida where it hurt most, scoring three goals in a 10-minute span to get within 4-3. Konecny capped the flurry with 1:08 left in the second.

Duclair’s power-play score with 13:01 left gave Florida a two-goal lead again, and Reinhart got the empty-netter with 2:06 remaining.