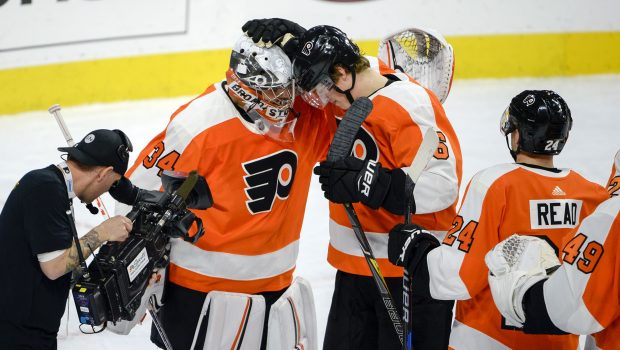 FLYERS STOP THE BLEEDING (BUT NOT BOOS) WITH 2-1 WIN!

Claude Giroux and Andrew MacDonald scored in the second period and the Flyers snagged a 2-1 victory over the Winnipeg Jets that snapped their five-game losing streak.

“We needed the two points. Looking at the standings, we needed it,” Flyers coach Dave Hakstol said. “It was a good for us to get headed in the right direction.”

Giroux found a way to stop the Flyers’ woes on the power play by scoring on a delayed penalty.

The Flyers drew boos from the home crowd on their first man advantage and were outshot 2-1 on their second to fall into a 2-for-26 slump. But Giroux then scored his 24th from the left dot after Mrazek had skated off for an extra attacker at 5:40 of the second period.

The up-and-down Flyers were playing the fifth game of a difficult six-game stretch against teams with a combined record of 245-118-37 entering Saturday. Their 0-4-1 skid had followed a six-game winning streak that moved them atop the Metropolitan Division.