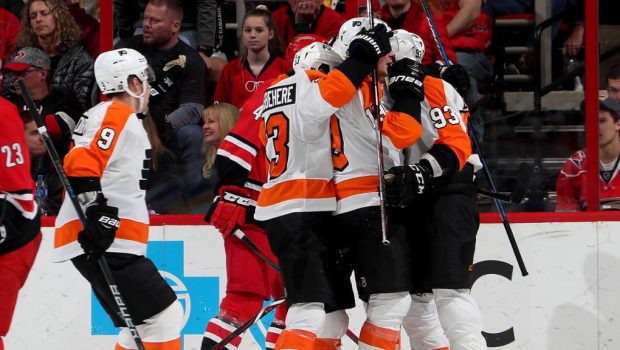 FLYERS STOP THE BLEEDING! 4-2 WIN IN CAROLINA IN PLAYOFFS PUSH

Valtteri Filppula scored on a breakaway in the third period, and the visiting Flyers held on to third place in the Metropolitan Division with a 4-2 win over the Carolina Hurricanes.

“You play for results,” said Filppula, who scored for the first time in 26 games, one of four third-period goals by the Flyers. “I think we’ve been playing well, creating chances. Every game has been pretty close. This should give us a lot of confidence today. Pretty good comeback. Nice to get two points.”

The Hurricanes (30-30-11) trail the New Jersey Devils by 11 points for the second wild card into the Stanley Cup Playoffs from the Eastern Conference. Carolina is 1-5-0 in its past six games.

Jordan Staal gave Carolina a 1-0 lead at 15:12 of the first period when his deflection of Jaccob Slavin’s shot from the left point bounced through Lyon’s legs.

The Hurricanes had a chance to extend their lead when Andrew MacDonald was called for a four-minute high-sticking penalty at 18:32 of the second, but the Flyers limited them to two shots.

“It was a grind, but I liked the way we played in the first two periods,” Flyers coach Dave Hakstol said. “The biggest thing was to make sure we got a big penalty kill to start with, then just go back at it. A lot of credit to the penalty kill and Alex Lyon to get that job done.”

Travis Konecny tied it 1-1 at 8:19 of the third period, redirecting Travis Sanheim’s shot from inside the blue line.

“I’ve been watching videos, trying to get to the net a little bit more,” Konecny said. “Good shot by Sanheim. He got their forward lost for a second and made a good shot to the net.”

The Flyers said the goal helped them get going on offense.

“When we got the first goal from Konecny, we got the momentum there and we started going a little harder,” said forward Oskar Lindblom, who got his first NHL point with an assist on Philadelphia’s second goal. “After that second goal, it felt like we had our game.”

Slavin put Carolina up 2-1 when he skated from the blue line through the left circle to beat Lyon high to the short side at 10:04.

Jakub Voracek tied it 2-2 at 11:58 after moving from his forehand to his backhand to pull Hurricanes goalie Cam Ward (23 saves) out of position.

Filppula made it 3-2 when he took a stretch pass from Wayne Simmonds and beat Ward on the forehand at 14:11. Slavin pinched along the left boards before Simmonds found Filppula.

“We’re trying to score the game-winner, right?” Hurricanes coach Bill Peters said. “The intentions are right. The result isn’t what you want. So it’s an unfortunate situation. You just stick with it and do your own job and trust that the other four are going to do their job when they’re out there, then everything will be fine.”

Michael Raffl scored into an empty net with 1:50 remaining to make it 4-2.