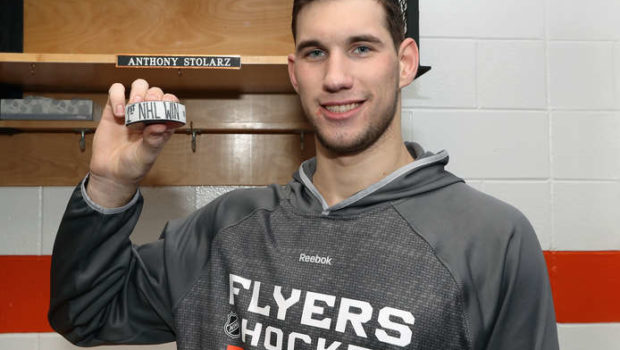 FLYERS’ STOLARZ COMES UP A WINNER IN GOALIE DEBUT 5-3!

“What I’ll remember most is winning,” Anthony Stolarz said after the Flyers’ 5-3 victory over the Calgary Flames last night. “Being able to win your first start is huge for me and my confidence.”

The 22-year-old native of Edison, N. J., was backed up by goals from Michael Raffl, Jakub Voracek, Chris VandeVelde, Wayne Simmonds and Roman Lyubimov. The Flyers snapped a two-game losing streak to improve to 10-10-3.

Stolarz was drafted by the Flyers in the second round in 2012 and had been recalled six other times before making his NHL debut as the tallest goalie (6-foot-6) in Flyers history. He said more than 30 family and friends made the 60-mile drive to see his first NHL game.

Stolarz allowed a short-handed goal on the second shot he faced, but stopped the next 23 shots and saw the Flyers take a 4-1 lead into the third period.

“I didn’t want to give up that first goal, but it happens,” he said. “I guess it was good to get it out of the way early. I calmed down a little bit and the jitters went away and I was just able to go out and play.”

The Flames grabbed an early lead when Brodie lifted a short-handed backhander under Stolarz’s catching arm for his first goal of the season. It was Calgary’s league-leading fourth short-handed goal.

The Flyers tied it at 17:42 when Voracek swung around the back of the net and fed Raffl for his fourth goal of the season. Voracek gave the Flyers their first lead of the game 52 seconds into the second period with his first power-play goal. Voracek’s intended pass for Wayne Simmonds deflected off Flames defenseman Mark Giordano and over Johnson for his eighth goal of the season.

“The most disappointing part of tonight is we got out of the first and they came out in the second and scored a bunch of goals in a short amount of time,” Giordano said.

“It’s a disappointing loss, but we have back-to-back games and we’ve got to finish this trip off on the right note. If we win tomorrow (in New York) it’s a 4-2 trip and that’s a good trip.”

Chiasson scored the Flames’ second short-handed goal of the night with 1:50 remaining.

“To be honest, I think (the Flames) were a little bit tired and we took advantage of it,” Voracek said. “(Stolarz) made a key save in the second period when it was 2-1. It was good to see him get his first win.”

Gulutzan, whose team played its fifth game in eight nights, said there are no excuses for his players’ performance.

“There’s no system for being outworked,” he said.