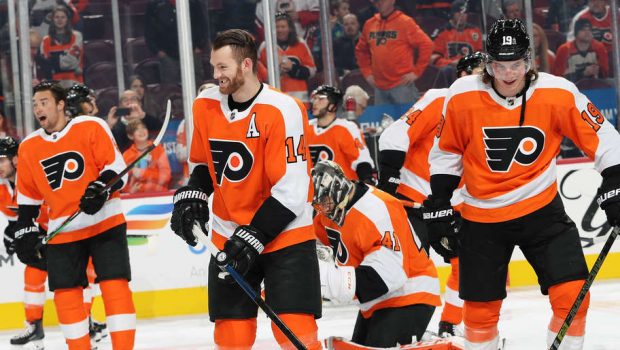 FLYERS STILL A PLAYOFFS LONGSHOT, BUT THEY’RE SURE CONFIDENT!

“Confidence helps in the power play,” Flyers Claude Giroux said. “You make plays, you keep it simple. The power play hasn’t won us a lot of games this year, but today we were able to make a few plays.”

That’s the way a captain with some swag talks!

The Flyers take on the Vancouver Canucks tonight on a roll that few fans had expected. They won their final three games before the All-Star break and have remained hot with four more victories in a row since returning.

That includes rallying from a 3-1 deficit against the visiting Edmonton Oilers before winning 5-4 on Saturday.

Nolan Patrick scored the game-winner in overtime with the other four goals coming on the power play. It was the first time all season that the Flyers recorded four power play goals in one game.

Hart, who was recently named the Rookie of the Month for January, won his sixth straight start.

“That just goes to show how guys are invested right now and how much we’re willing to pay the price to succeed,” Hart told reporters. “Guys are going all out right now and we want to keep this thing rolling. It’s been a lot of fun and we’re going to do everything we can to keep things rolling.”

The Flyers also received a boost with the return of key defenseman Shayne Gostisbehere, who had missed the previous three games with a lower-body injury.