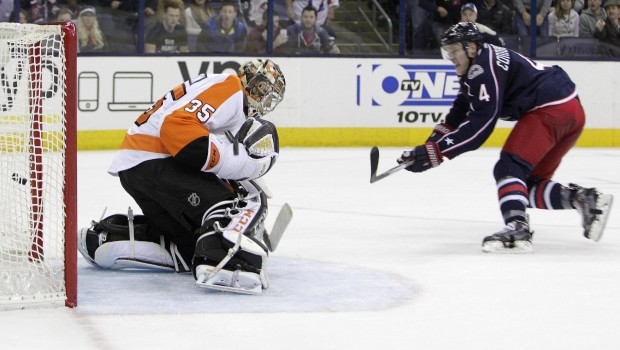 FLYERS STEAL A POINT IN 3-2 SHOOTOUT LOSS AT COLUMBUS

The Flyers won the battle but lost the war with the Columbus Blue Jackets last night, stealing a point and falling 3-2 in a shootout.

Kevin Connauton took a pass from Ryan Johansen and scored at 1:58 of overtime (photo above) to give the Blue Jackets their fourth straight victory.

Brayden Schenn sent the game to overtime when he scored the tying goal for Philly (9-13-5) with 56 seconds left in regulation, a minute after the Flyers had pulled goaltender Steve Mason for an extra attacker.

It initially was waved off on the ice, but that ruling was overturned upon video review when it was determined the puck entered the net on Schenn’s original shot as the referee was whistling for play to stop.

It was Schenn’s second goal of the game, his ninth of the season.

Connauton said the Blue Jackets did a good job of regrouping after giving up the lead in the final minute of regulation.

“After they scored that one, the mood was kind of down on the bench, but we forgot about that one and pushed on,” he said. “Good teams are able to forget about mistakes and make up for it.”

Mason, playing for the first time in Nationwide Arena since the Blue Jackets traded him to the Flyers in April 2013, had 21 saves. Ex-Flyers goalie Sergei Bobrovsky made 19 saves.

“I don’t think anybody was happy with effort. We looked sluggish out there,” Mason said.

The Flyers completed a five-game trip 1-2-2 and continue to look for consistency.

“We weren’t generating a lot. We weren’t great in our own end,” Flyers defenseman Braydon Coburn said. “We were lucky to squeeze it into overtime. I’m not saying we didn’t work hard enough tonight, but not hard enough to generate chances or dominate parts of the game.”

The game was the first in Columbus for Flyers left wing R.J. Umberger, who is third on the Blue Jackets’ career points list, since being traded June 23 for Scott Hartnell. It was also Umberger’s 700th NHL game.

Hartnell gave Columbus the 2-1 lead in the second period. Boone Jenner scored for the Blue Jackets before Schenn got the Flyers on the board with a power-play goal late in the first period.

Philly got the equalizer with 2:07 left in the first on its second power play. Claude Giroux set up Schenn in front with a feed from the left wall. The pass went directly to Schenn in the slot for a one-motion redirect on the third of five shots the Flyers had in the period.

In the second period Hartnell took advantage of chaos in front of Mason. He kicked the puck from his right skate to his stick and swiped it backhand past Mason with 9:21 left in the period.

Mason said he was obstructed on Hartnell’s goal.

“I haven’t seen the video, but I felt I had contact, pushed me out of the net and didn’t put me in a position to get back,” he said.

Even though the Blue Jackets gave up the lead late, Hartnell said there wasn’t any panic.

“We’re definitely disappointed giving up a point at the end of the game but it’s just a sense we’re going to win every night right now,” he said.

The Flyers were 1-for-4 on the power play, and the Blue Jackets went 2-for-4.