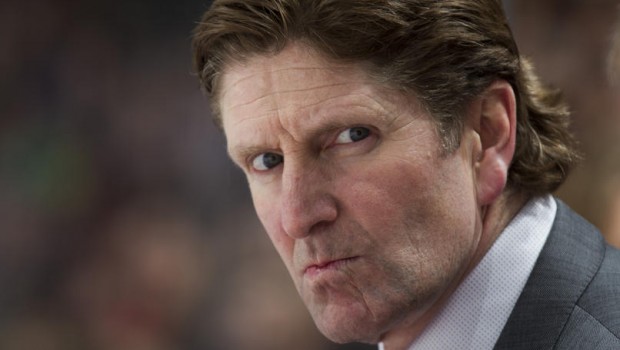 WHERE DO FLYERS STAND IN THE MIKE BABCOCK BAKE-OFF?

The Flyers possess plenty of offensive firepower in Claude Giroux and Jake Voracek, and a group of young up-and-coming defensemen. Ron Hextall is eager to place his stamp on the franchise entering his second year as GM and hiring a new coach like Babcock is one way to do that.

On the downside, Hextall lacks a proven track record.

If you’re worrying that the Flyers are fiddling while the rest of the NHL is burning for coach Mike Babcock, this Associated Press story is for you:

From San Jose to Philly, Mike Babcock has no shortage of NHL coaching options after the Detroit Red Wings granted him permission to speak to other teams.

Buffalo and Toronto are in the mix. So could be Edmonton, where the focus of attention is already turning with the anticipated arrival of center Connor McDavid in next month’s draft.

And Babcock is still open to staying put in Detroit before his contract runs out June 30.

While the 52-year-old weighs his prospects, the NHL coaching carousel has not budged with a number of candidates available, including: Todd McLellan, Dan Bylsma, Peter DeBoer and Randy Carlyle.

Though high-profile free-agent players hit the open market every summer, it’s rare for a coach with Babcock’s resume to become available.

Since Babcock was hired, there have been 109 coaching changes in the NHL.

As highly regarded as Babcock might be, he didn’t do it alone in Detroit. Babcock joined a franchise that had front-office stability and plenty of on-ice talent. The Red Wings went 58-16-8 in Babcock’s first season with a lineup that included Nicklas Lidstrom, Pavel Datsyuk, Henrik Zetterberg, Brendan Shanahan, Chris Chelios and Steve Yzerman.

Since losing Game 7 of the 2009 Stanley Cup finals to Pittsburgh, the Red Wings have won three of nine playoff series.

Their core isn’t getting younger with Pavel Datsyuk set to turn 37 in July, a concern Babcock expressed after Detroit was eliminated by Tampa Bay last month.

”Who’s going to replace Pav?” Babcock said. ”Our team is not as good as it was.”

Here’s a glance at the pros and cons Babcock faces in making his decision:

BUFFALO: After bottoming out with consecutive last-place finishes and completing a purge of high-priced veterans, the Sabres are finally prepared to begin building their team. Buffalo has a promising group of youngsters, including the likely addition of Boston University center Jack Eichel, who expected to be selected No. 2 in the draft. Owners Terry and Kim Pegula have deep pockets, and not afraid of making big splashes as they did in hiring Rex Ryan to coach their other team – the NFL Buffalo Bills. Babcock and Sabres GM Tim Murray previously worked together in Anaheim.

On the downside, the Sabres are still a few years from being considered contenders.

DETROIT: Babcock is familiar with the organization from top to bottom. He and his family also enjoys living in Motown.

On the downside, the Red Wings’ roster has question marks. The team also has a candidate ready to replace Babcock in minor-league coach Jeff Blashill.

EDMONTON: McDavid is regarded as a once-in-a-generation player and, if drafted first, will join a team that already includes three recent No. 1 picks including Ryan Nugent-Hopkins. The Oilers underwent a major front-office overhaul with Chiarelli taking over as GM, and former Hockey Canada boss Bob Nicholson appointed CEO. Babcock worked for Nicholson in coaching Canada to win the past two Olympic championships.

On the downside, the small-market Oilers might have difficulty out-bidding other teams for Babcock.

PHILLY: The Flyers possess plenty of offensive firepower in Claude Giroux and Jake Voracek, and a group of young up-and-coming defensemen. Ron Hextall is eager to place his stamp on the franchise entering his second year as GM.

On the downside, Hextall lacks a proven track record.

TORONTO: The Maple Leafs play in a major hockey market and have the corporate-backed ability to make a lucrative offer to land Babcock. They also might finally have front-office stability with Shanahan now in charge.

On the downside, the Maple Leafs’ recent run of front-office turmoil has contributed to Toronto missing the playoffs for the ninth time in 10 seasons. They have an aging, high-priced roster with few promising prospects in their system.

WILD-CARDS: The Sharks are rebuilding through youth and have a solid fan base. … New Jersey has a new GM in Ray Shero, but a team that lacks high-profile stars. … The Bruins under-achieved in missing the playoffs, but handcuffed by salary-cap concerns. … The Blues are stocked with talent and present Babcock a shot at taking over a ready-to-win team. … The Canadiens? Coach Michel Therrien could be on the hotseat if Montreal fails to advance past the second round. Their place in hockey history is alluring, and Babcock did attend Montreal’s McGill University.