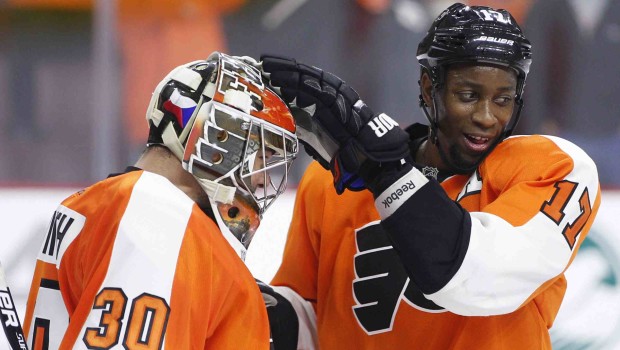 The Flyers had been making a playoffs push, especially as the All-Star game break is approaching, but they blew a big chance to advance last night against the Boston Bruins at the Wells:

Brett Connolly scored with 1:54 remaining to give the Bruins a 3-2 win.

Bruins captain Zdeno Chara put a puck on net from the left point that Connolly redirected past Flyers goalie Michal Neuvirth (above). Replay review upheld the call on the ice that Connolly played the puck with his stick below the crossbar.

The Flyers had chances to climb back into the game in the second period when they had four power plays in the first 10:57 of the period. But the only time they took advantage of the man-advantages was Simmonds’ goal from in front at 3:45 of the second.

The Flyers were more disappointed in their slow start than the power play failures.

“We just have to be mentally better,” Simmonds said. “I think it’s not physical. If you can come out second and third and play the way we did then I don’t think it’s physical at all. So I just think we have to make sure we’re getting ourselves up for the first periods and it starts with the first shift and it snowballs from there.”

Philly will play the League-leading Washington Capitals Wednesday in their final game before the All-Star break.

“We have to put that behind us and we have a lot of games in front of us moving forward this year here,” Simmonds said. “We have a few games in hand here so we can make up some ground. We just have to make sure we’re doing it now we can’t wait for help. We have to do it ourselves.”

The win was the Bruins’ fifth in their past six games (5-1-0), moving them past the idle Tampa Bay Lightning into third place in the Atlantic Division.

That game the Flyers followed with the go-ahead goal 1:22 later en route to a 3-2 victory.

“That definitely creeps into your mind a little bit,” Marchand said. “I thought we showed a lot of character bouncing back and getting that third goal.”

Connolly scored his second goal in 24 games, and first against a goaltender since Nov. 27. He was a healthy scratch Saturday against the Columbus Blue Jackets.

“Not only did he score the winning goal, I thought he was having a great game,” Bruins coach Claude Julien said. “Even the last game [Jan. 21 against the Vancouver Canucks], he wasn’t a bad player and he did a lot of good things. Nice for him to come in and I think everyone is pretty happy for him that he got the winner. He deserved it for the way he played tonight. I thought he was strong along the wall, making the right plays and being in the right place. He worked hard and earned a big goal for us.”

Connolly’s linemates, Marchand and Bergeron were happy he was rewarded with a goal.

“Brett was so close the past few games, you could tell it was coming,” Bergeron said. “Big goal for us, game-winner, Can’t ask for anything more for him. … If he plays like that, moves his feet like he’s been the last few games, most likely he’s going to have a lot of good results.”

Connolly finished October with four goals in five games, but has three goals in 36 games since.

“Obviously it’s been a frustrating little while,” Connolly said. “Been getting lots of chances, getting some good opportunities. To see that one go in, in such a big game, right before the All-Star break, it’s obviously good to see it go in. … It’s just a matter of sticking with it. I’ve said that for a while, got to stick with it. Things change in a hurry in this League. When you’re confident you’re a different player. When you see a puck go in the net it’s a good feeling. I was obviously very happy with that.”

Bergeron scored a power-play goal from the slot at 5:04 to make it 1-0 when he banged in his rebound after Flyers defenseman Radko Gudas blocked his first shot. Marchand one-timed a cross-ice pass from Chara from a sharp angle at 17:27 for a power-play goal to make it 2-0.

Marchand has goals in five straight games, a personal NHL best. It also was his 20th of the season.

Bergeron and Marchand have combined to score nine of the Bruins’ 15 goals in their past five games.

“Not really a stat you pay much attention to,” Bergeron said. “You just go out there and do the job.”