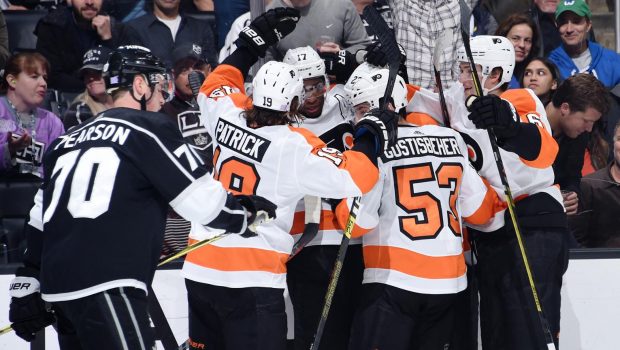 Oskar Lindblom had a goal and an assist to help the Flyers to a 5-2 victory over the Los Angeles Kings.

Defenseman Ivan Provorov scored his second goal in as many games, and Brian Elliott made 25 saves for the Flyers (6-7-0), who opened their four-game Western Conference road trip with a 3-2 win against the Anaheim Ducks on Tuesday.

Ilya Kovalchuk had a goal and an assist for the Kings (3-8-1), who have lost seven of eight games. Jack Campbell made 26 saves in his first start since No. 1 goalie Jonathan Quick had surgery to repair a torn meniscus in his knee.

Lindblom gave the Flyers a 3-1 lead at 14:05 of the second period. After it was ruled a good goal on the ice, the Situation Room confirmed the decision by video review that showed the puck hit Los Angeles defenseman Sean Walker’s stick after Lindblom kicked it.

Kovalchuk pulled the Kings to within 3-2 at 18:41. He has five points (two goals, three assists) his past two games.

“I think the guys feel great, feel confident,” defenseman Radko Gudas said. “You can see everybody is making plays in the hard areas, having their heads up, and making the right plays and the hard plays. I think it’s a step in the right direction.”

Wayne Simmonds put the Flyers ahead 2-1 at 10:53 of the second with a one-timer from the right face-off circle, 49 seconds after Jeff Carter tied it 1-1 with a power-play goal for the Kings at 10:04.

The Flyers had a similar response against the Ducks, when Nolan Patrick scored the game-winning goal 21 seconds after Anaheim’s Pontus Aberg tied it 2-2 late in the third period. The ability to get goals back quickly, center Sean Couturiersaid, is a sign of their improvement.

“We’re learning from our mistakes earlier,” said Couturier, who had an assist. “It’s a long game, and we’re getting some good response right after, and we need that. It’s a tight game, you got to keep playing.”

The Flyers took a 1-0 lead at 17:35 of the first period when Provorov scored on a one-timer in the slot off a pass from Dale Weise.

Los Angeles had three power plays in the first period, including 1:35 at 5-on-3. But the Flyers penalty kill, which is ranked 30th in the NHL (68.8 percent), allowed two shots on goal during the two-man advantage and prevented the Kings from establishing early momentum.

“I think we played really good the whole game,” Lindblom said. “We had a good PK the first period and just kept building on that. They didn’t have much, so it was a perfect away game.”