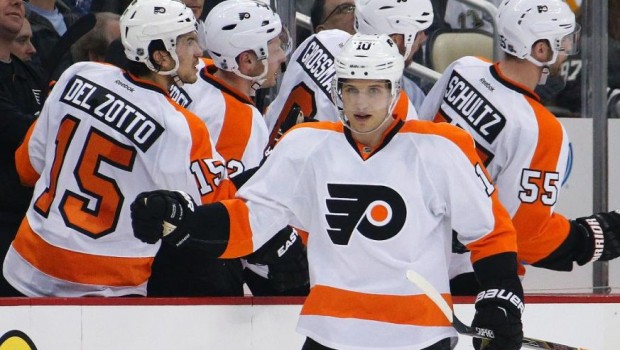 FLYERS SLAP AROUND THEIR PATSIES, THE PENGUINS, 4-1

Who knows why the underperforming, NHL playoffs-missing Flyers have a spell over the Pittsburgh Penguins?

The Flyers are ticking off the days until their frustrating and inconsistent season ends. If the Penguins can’t get healthy — or stay out of the penalty box — it won’t be long before they are doing the same.

Brayden Schenn (photo above) scored twice, Vincent Lecavalier added his first goal in nearly three months, and the Flyers had little trouble with the injury-depleted Penguins 4-1 on Wednesday night.

Carlo Colaiacovo chipped in a rare goal for the Flyers, who ended a nine-game, road-losing streak. Steve Mason stopped 24 shots for Philly, which won its seventh straight game in Pittsburgh.

“I wish we had more games here,” Flyers coach Craig Berube said. “We get excited and we play well against the Penguins. It’s one of those teams that bring out the best in us and we feel pretty comfortable in this building, that’s for sure.”

Sidney Crosby scored his 300th career goal for the Penguins and boosted his NHL-leading point total to 80, but Pittsburgh mustered little offense on a night the team played without injured stars Evgeni Malkin and Kris Letang.

“He’s an explosive offensive player who creates a lot from sometimes nothing,” Penguins defenseman Rob Scuderi said. “I think any team is going to miss that, and we certainly do.”

Crosby became the fifth Penguins player to reach 300 goals when he flipped in a rebound off Patric Hornqvist’s shot 3:29 into the game. It was his 31st career goal against the Flyers — more than any other team — and gave the Penguins an early boost.

The momentum didn’t last on a night Pittsburgh was forced to go with 19 skaters after Malkin was scratched. The Penguins are already down to five defensemen while Letang recovers from a concussion. Philly eventually wore Pittsburgh down, something that has happened with regularity for the Penguins against their cross-state rivals regardless of the circumstances.

Lecavalier ended an extended Philly surge by pounding a rebound by a sprawled Fleury with 2:46 left in the first to tie it. The goal was Lecavalier’s eighth of the season and first since Jan. 3.

“It’s just good for your confidence,” Lecavalier said. “For your next shift and the rest of the game, you feel good out there. Your vision’s better. Everything’s a little bit better. You don’t squeeze your stick as much.”

Philly continued to build momentum as Pittsburgh struggled to spend any sort of quality time in the offensive zone. Frequent trips to the penalty box didn’t help either. The Penguins took five penalties, putting additional stress on a defense already spread thin. All five defensemen played at least 20 minutes.

“Too many bad penalties, and it’s been a recurring theme recently and it’s something we have to work on,” Scuderi said. “You never want to take any penalties but there’s the negative kind, and we’re taking too many lately.”

Schenn put the Flyers in front 12:43 into the second when he cruised down the slot and controlled a bouncing puck before knocking it into the net. Pittsburgh lacked the firepower — or the legs — to keep up. The Penguins failed to create sustained pressure around Mason, and when Schenn deflected in his 16th goal of the season at the end of Philly’s fifth power play just 49 seconds into the third, Pittsburgh was done.