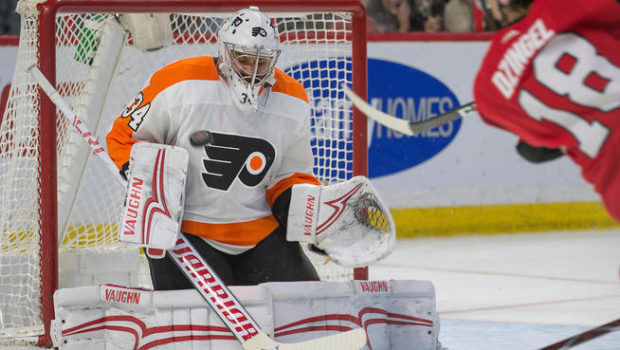 Brandon Manning had a goal and two assists and the Flyers topped the Ottawa Senators 5-3 on Saturday for their fifth consecutive victory.

Ivan Provorov, Robert Hagg, Claude Giroux and Nolan Patrick also scored for the Flyers. Petr Mrazek (above) made 25 saves in his second start for the Flyers since being acquired in a trade with Detroit.

Mike Hoffman, Ryan Dzingel and Matt Duchene scored for the Senators. Craig Anderson, who stopped 34 shots, lost his 20th game of the season.

The Flyers took a 3-1 lead early in the third period on Giroux’s 22nd goal of the season. Manning sent Giroux in all alone and the Flyers’ star made some great moves before beating Anderson in close.

Patrick made it 4-1 at the seven-minute mark as he tipped in Manning’s shot.

Less than two minutes later, Manning made it 5-1 on a fortuitous bounce. Manning looked to shoot the puck down the boards and as Anderson went to play it, the puck took a weird bounce and went in the net.

The Senators outshot the Flyers 12-9 in the second and appeared to tie the game, but had a goal called back.

Zack Smith scored at the 12-minute mark of the period as he tapped in Hoffman’s rebound. But the Flyers challenged the goal believing it was offside and upon review won the challenge.

The Flyers opened the scoring just 28 seconds into the game as Provorov took a pass from Giroux in the slot and beat Anderson with a quick wrist shot.

Hagg made it 2-0 at the seven-minute mark as he got through Ottawa’s defense and fired a shot over Anderson’s shoulder for just his second of the season.

Hoffman cut the lead in half with a power-play goal, beating Mrazek on a one-timer.