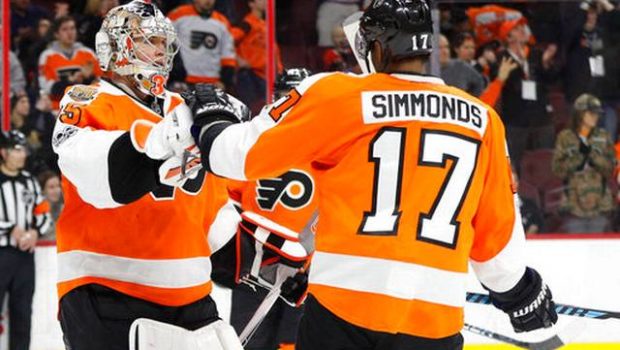 Wayne Simmonds got his 30th goal of the season as the Flyers scored five times in a fight-filled first on the way to a 6-3 victory over New York on last night at the Wells.

”It’s old-time hockey,” Flyers coach Dave Hakstol said. ”Not many hockey games follow the pathway this one did. We were absolutely ready to start this hockey game. We were hungry and the players did an outstanding job.”

Cal Clutterbuck, Jason Chimera and Andrew Ladd had the goals for the Islanders, who lost their third in a row and seventh in the last 10 games. They fell into a tie with the Flyers at 82 points.

”What do you say? Nothing,” coach Doug Weight said.

New York has six games remaining, while the Flyers have five.

Weise started the scoring 4:30 into a record-setting first period for the Flyers by finishing a good pass from Couturier with a forehand from in front that went high over Thomas Greiss.

Couturier scored on a rebound 1:19 later to make it 2-0, and Greiss was pulled after allowing Gudas’ slap shot from the point to get past him with 11:54 left in the first period.

Greiss slammed his stick into the side boards as he exited the ice in frustration.

Weise had an assist on Gudas’ goal and became the fastest player in Flyers history to record a ”Gordie Howe hat trick” – with a goal, an assist and a fight – when he dropped the gloves with Travis Hamonic with 11:32 remaining in the period.

”You can’t draw up a better start than that,” Weise said. ”(Hamonic) asked me going up the ice and I kind of got excited because I already had a goal and an assist. I couldn’t say no to that one. It’s a nice record to have.”

The Flyers were far from done.

Weal netted his team-leading sixth goal in March, and seventh since being called up from Lehigh Valley of the AHL on Jan. 25, when he followed his own miss and scored past Greiss’ replacement, Jaroslav Halak.

Simmonds finished the dominant period with his milestone goal on a power play when Shayne Gostisbehere’s slap shot deflected off his knee and then off Islanders defenseman Johnny Boychuk’s left hip before crossing the goal line.

Simmonds then joined Weise with a Gordie Howe hat trick when he won a one-sided fight with Anders Lee with 6.3 seconds left in the period, marking the first time in the history of the franchise once known as the Broad Street Bullies that two players had Gordie Howe hat tricks in one period.

”It was great and good for the team,” Simmonds said. ”We were definitely going in the first.”

The five first-period goals were the most this season in one period for Philly.

”It was just an awful period,” Boychuk said. ”We have to be ready every period of every game this time of year. We’re fighting for the playoffs. At the end of the day we can’t give up five goals. The whole team has to be ready for the puck drop and we weren’t.”

Clutterbuck shot high over Steve Mason early in the second to get the Islanders on the board. But that was the only goal New York managed despite outshooting Philadelphia 22-3 in the period.

Chimera netted his 18th of the season 40 seconds into the third on a wrister from in front after the puck caromed hard off the back boards from Calvin de Haan’s slap shot. Ladd made it 5-3 with 3:58 remaining with a wrist shot that deflected off Mason’s back and in.

Filppula’s empty-netter with 1:41 left completed the scoring. Simmonds picked up his second assist on that goal.