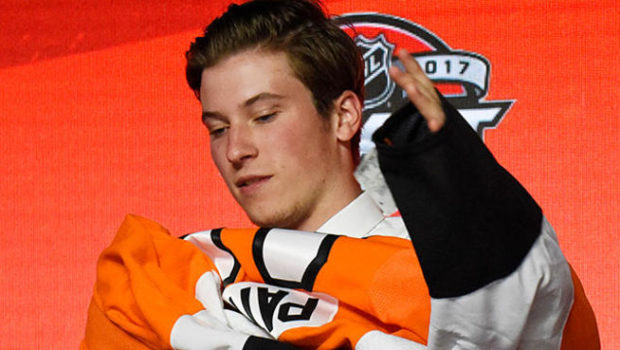 FLYERS SIGN TOP PICK PATRICK — WHEN WILL HE PLAY?

The signed 2017 No. 2 overall pick Nolan Patrick to a three-year, entry-level contract yesterday, and now the question is:

When will he play?

Patrick’s signing comes shortly after the New Jersey Devils signed Nico Hischier, the No. 1 overall pick, to his entry-level pact.

The Flyers announced late last month that Patrick had a second abdominal surgery before being drafted and is expected to return to full activity in four to six weeks.

At the scouting combine in early June, Patrick said he had a sports hernia on both sides and that one was “misdiagnosed.” Philly-based Dr. William Meyers performed the surgery.

The injury contributed to him missing more than half of last season for Brandon of the Western Hockey League.

Patrick’s medical issues were part of the questions about him leading up to the draft, and the Flyers’ medical staff evaluated him independently.