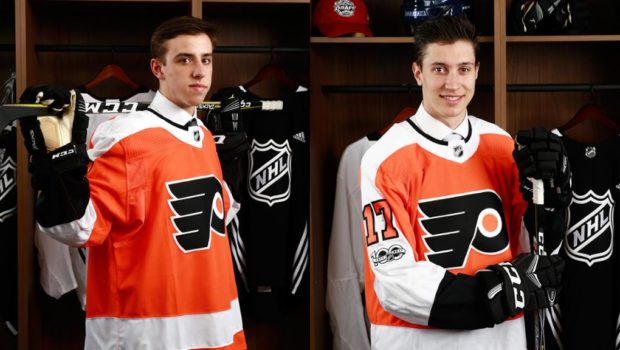 Frost was selected in the first round (27th overall) and Ratcliffe in the second round (35th overall).

* The 27th overall pick used to select Frost was acquired by the Flyers, along with center Jori Lehtera and a conditional 1st round pick in 2018, from the St. Louis Blues in exchange for forward Brayden Schenn.

* Frost recorded 20 goals and 42 assists for 62 points in 67 games for Sault Ste. Marie in his second season with the club.

* His 62 points finished fourth on the Greyhounds in scoring and were a 35-point improvement from his rookie season, where he posted 27 points (7g-20a) in 65 games.

* During the 2016-17 regular season, he helped the Greyhounds to a 48-16-3-1 record and a first-place finish in the West Division… He scored eight points (2g-6a) in 11 playoff games, which finished third on the team in scoring.

* The 35th overall pick used to select Ratcliffe was acquired by the Flyers in a draft-day trade from the Arizona Coyotes in exchange for the club’s 44th, 75th and 108th pick in the 2017 NHL Draft.

* Ratcliffe recorded 28 goals and 54 points in 67 games for Guelph during the 2016-17 season, his second year in the OHL… For his efforts he was the recipient of the Storm’s Most Improved Player.

* He also played in the 2017 Sherwin-Williams CHL/NHL Top Prospects Game, where he scored a goal to help lead ‘Team Cherry’ to a 7-5 victory.

* Ratcliffe has represented Canada internationally at the Under-18 World Championships in 2017, tallying a pair of goals in five games.