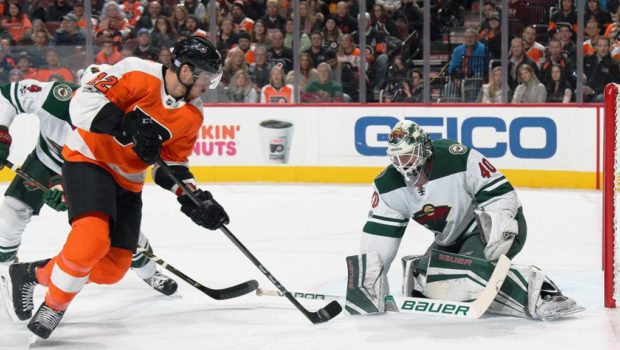 Excuse me, but when are the Flyers going to show us who they really are?

Yesterday is a good example of the latter.

Jason Zucker scored his sixth goal in three games for the Minnesota Wild for a 1-0 win over the Flyers.

Nino Niederreiter created a turnover behind the Flyers net and banked a pass to defenseman Matt Dumba at the right point. Flyers forward Travis Konecny blocked Dumba’s one-timer, and the puck bounced off the end boards to the left of the net for Zucker, whose low shot went in off goalie Brian Elliott at 1:08 of the third period.

Elliott made 26 saves for the Flyers (8-7-2), who went 0-for-3 on the power play and were shut out for the fourth time this season.

The Wild (7-7-2) and Flyers will play at Minnesota on Tuesday.

Dubnyk extended his shutout streak to 136:20, dating to the third period against the Maple Leafs. He made 41 saves against Montreal.

Minnesota had 18 blocked shots, including three in the final minute when Elliott was pulled for an extra attacker.

“We got some chances, we just didn’t bury them,” Flyers forward Wayne Simmonds said. “Dubnyk played well. They played five guys packed in, in front of the net. We probably needed to pop a guy out or pop a guy up top or something like that. Thought we played a good game, just couldn’t execute and get a puck in the net.”