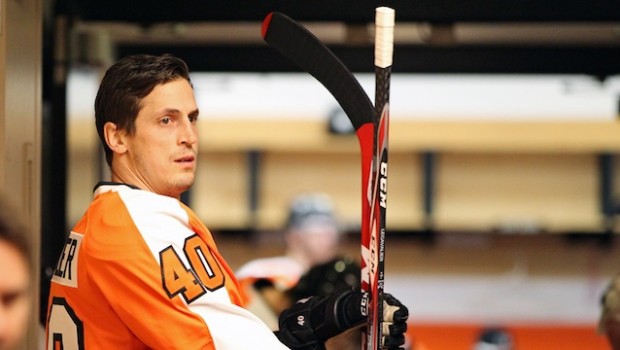 FLYERS SHUFFLE OFF TO BUFF LOOKING FOR A VICTORY

Maybe the Flyers can get their act together on the road.

After winning four of five games before falling 4-3 in overtime against Buffalo (3-7-0) on Tuesday, the Flyers (4-3-2) followed that with a lackluster effort against another team that failed to reach the playoffs last season, losing 4-1 to New Jersey Thursday night.

“We didn’t deserve to win the game,” Jakub Voracek said. “They were better than us.

That’s rarely been the case over the Flyers’ last 14 visits to Buffalo, going 10-2-2 and winning three in a row – all decided by one goal.

Michael Raffl has scored the decisive tally in each of the last two matchups at First Niagara Center, including a third-period tally in a 2-1 victory Feb. 15.

Brayden Schenn leads Philly with four goals, scoring two against the Sabres on Tuesday before setting up his brother Luke Schenn’s first tally of the season Thursday.

Brayden Schenn, however, has scored just once in five games in Buffalo, while Voracek has one in nine visits.

That doesn’t bode well for the right wing, who has yet to find the net through nine games. Voracek has scored at least 22 goals in three straight seasons while his career-high 81 points last season led the team.

The Sabres followed their win at the Wells with a 4-3 loss at Pittsburgh on Thursday, despite unloading 24 shots in the third period and outshooting the Penguins 53-29 overall. It was coach Dan Bylsma’s first meeting with the Penguins since he was fired in 2014.

“We had a number of good looks,” Bylsma said. “I think we gave them some easy opportunities with our puck management in the first.”

Bylsma sees some promise in Buffalo generating 93 shots over the last two games.

“It’s where we’ve played,” he said. “There are certainly a handful of stretches in tonight’s game and the Philly game where we were playing in our own end, but for large portions you’re playing in the offensive end. You’re having offensive zone time. We have the mentality of getting pucks and bodies there. That’s what we’ve done well.”

Ryan O’Reilly has at least one point in four straight games, totaling two goals and five assists. The left wing had two assists Thursday after setting up Tyler Ennis’ tally against the Flyers.

He has six points in eight career meetings with the Flyers.

Ennis has three goals and two assists in the past six games, but he sat out Thursday due to a lower-body injury. He’s considered day to day.

Jack Eichel may be looking forward to a return home, where the rookie has scored all three of his goals in six games. The second overall pick failed to get his first on the road Thursday, despite tying five others for the franchise rookie record with eight shots on goal.