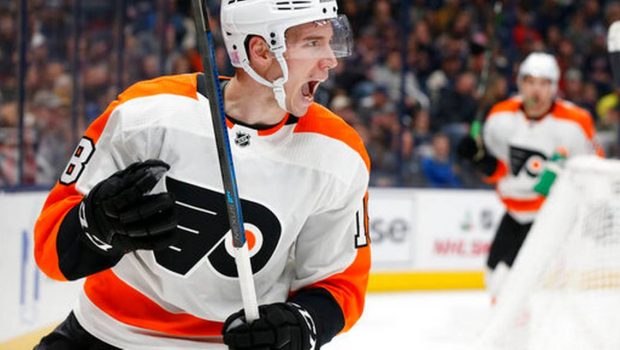 The Flyers have an NHL turkey coming to town the day after Thanksgiving.

Philly earned at least one point in 12 of the last 14 games thanks to a league-high eight shootouts.

“It feels nice, coming back from an injury and everything that has kind of happened this year,” said Scott Laughton, who scored one of the three goals and has looked fresh after returning from a 13-game injury absence with a broken finger. “It was my third game back, so I’m starting to get my legs underneath me and feeling better.”

Goaltender Brian Elliott was superb with 28 saves, including several in the final frenetic minute as the Blue Jackets had an empty net. But after the game, Flyers head coach Alain Vigneault announced that second-year goaltender Carter Hart will start against Detroit.

Captain Claude Giroux scored what turned out to be the go-ahead goal and eventual game winner on the power play. The Flyers’ power play struggled for a while as they missed on their first four attempts before Giroux connected.

“They were doing a good pressuring us and we really didn’t have an answer,” Giroux said. “We finally got our stuff together and started attacking a little quicker and were able to get one. It was huge.”

The Red Wings will enter this game at 7-17-3 for the worst record in the league.