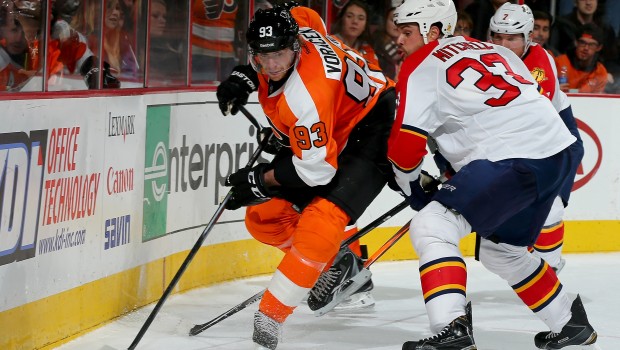 FOR FLYERS, SHOOTOUTS HAVE BECOME JUST ANOTHER WAY TO LOSE

Okay, so the Flyers lost another shootout last night — to the Florida Panthers at the Wells Fargo Center.

They got a point but left one on the table, as they have done all season.

Why are the Flyers so bad at this unique way of ending an athletic contest?

“Shootout is 50/50 on a paper, but for us I think its 10 to 90,” said Flyers right wing Jakub Voracek (photo above) , who scored his team’s only goal in regulation and its only shootout goal.

Against Florida, the Flyers’ showing was bad.

Voracek scored in the shootout, but most of the Flyers’ other five shooters didn’t get off a good shot. Sean Couturier, the last Flyer to go, lost the puck and didn’t even get off a shot.

Do the Flyers practice shootouts enough?

“Well, obviously not,” said forward Vincent Lecavalier, who was one of the Flyers’ shooters in his first game back after seven benchings. “I mean, maybe we could do more. They’re obviously very important points that you’re kind of leaving on the table. We have been practicing, but we probably could do more.”

The Flyers do work on shootouts now and then, usually the day after a shootout loss and a little more often of late.

“Some guys are good at shootouts, some guys aren’t. We work on it. It’s probably a mental thing more than anything though.”

It probably is mental, but perhaps physical, too. Maybe the Flyers would be better in them if they devoted five minutes to shootouts at the end of every practice, a tactic the Pittsburgh Penguins used with a lot of success when Dan Bylsma was their head coach from 2008-09 to 2013-14.

“Just gotta find a way to win them,” Flyers goalie Steve Mason said. “We’re not scoring enough in it. We’re not stopping enough. Tonight we had two opportunities to win it and we couldn’t.”

Mason is as guilty here as Flyers shooters as he’s allowed eight goals in 15 shots in losing all four of his shootouts.

Against Florida, Mason stopped four of six shots, but was beaten in the sixth round on a harmless-looking forehand attempt by Dave Bolland. That put Florida ahead 2-1 in the shootout, then it was over when Couturier couldn’t even get a shot on goalie Roberto Luongo.

“We have to find ways to bear down,” Mason said. “That’s five shootouts we’ve lost this year, five points we’ve left out there, five points that probably would have put us into the playoffs. There’s your difference.”

The Flyers, now 11-14-6 through 31 games, actually are eight points out of a playoff spot in both the division and wild card races. But that deficit would be half of what it is had they won four of five shootouts instead of losing them all.

“I think we do (practice) once in awhile … at various times,” defenseman Mark Streit said. “But games are piling up and you want to work on it, but also you don’t want to crush the goalies. But obviously you see the results and we’ve got to change something. We work on them a little bit. Maybe we have to work on them more.”