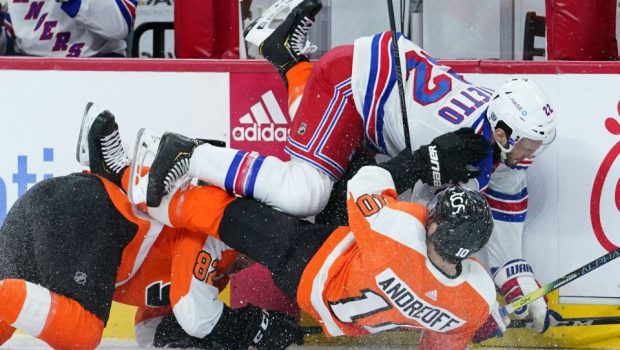 FLYERS SHARP IN 1ST GAME SINCE FEB. 7 — RANGERS WERE SHARPER!

Kaapo Kakko and Artemi Panarin scored in the shootout to give the Rangers a 3-2 victory over the Flyers, who were playing for the first time in 11 nights because of the pandemic.

Colin Blackwell and Brendan Smith scored in regulation for New York, which snapped a four-game skid.

Nicolas Aube-Kubel and Joel Farabee scored for the Flyers, who were playing for the first time since Feb. 7 because of COVID-19 and were without six players who are still in the COVID-19 health and safety protocol, including captain Claude Giroux, whose streak of playing in 328 consecutive games ended.

Sean Couturier had Philadelphia’s lone goal in the shootout.

Smith put New York up 2-1 on his first goal of the season with 11:39 left. Panarin, back from two-game absence due to a lower-body injury, set up the goal with a cross-crease pass to a wide-open Smith.

With goalie Carter Hart pulled for an extra skater, Philadelphia tied it with 1:14 left in regulation on Farabee’s seventh of the season. Ivan Provorov shot the puck off the back boards, and Kevin Hayes deflected it toward the net to Farabee, who poked it home.

The Flyers, who had four games postponed, had just one practice and yesterday morning’s skate since its last action.

But the Flyers came out sharp in the first period.

Aube-Kubel gave the Flyers a 1-0 lead 59 seconds into the game when he batted home the puck after a scramble in front.

The Rangers nearly tied it on the power play with 45 seconds left in the first, but Panarin’s slap shot clanged off the post.

Blackwell evened it 3:24 into the second period on the power play on a deflection of Pavel Buchnevich’s shot. The Rangers had a great chance to take the lead with 3:19 left in the period, but Hart stopped Buchnevich’s penalty shot after Buchnevich was hooked by Provorov on a breakaway attempt.