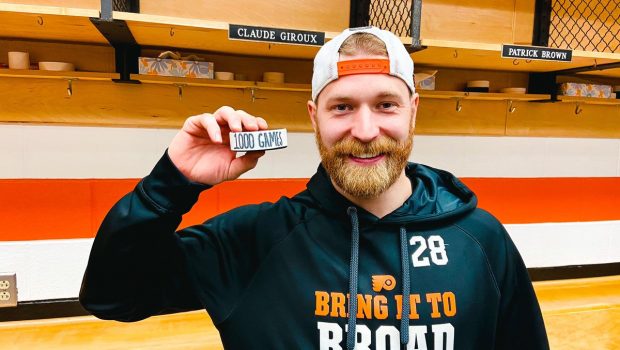 It was Claude Giroux night at the Flyers last night.

And even though the longtime captain didn’t score, the Flyers rallied to a 5-4 win over the Nashville Predators.

But last night was Giroux’s 1,000th game in a Flyers uniform and likely his last one.

With his contract set to expire this summer, it’s been assumed for a while now that Giroux would be moved. It’s also believed that Giroux, who has control over the situation thanks to his no-movement clause, wanted to at least reach the 1,000-game milestone as a member of the only team he’s ever played for.

Philadelphia took him with the 22nd overall pick in the 2006 NHL Entry Draft and Giroux has reached or surpassed the 85-point mark four times over his career and has provided the Flyers with a total of 291 goals and 900 points.

Unfortunately though, for years the Flyers have struggled to get anything going under him. This will be the sixth time in the last 10 seasons that Philadelphia has missed the playoffs and the Flyers haven’t gotten further than the second round over that span. Their best run with Giroux was early in his career when they lost to the Chicago Blackhawks in the 2010 Stanley Cup Final. For what it’s worth, Giroux did his part during that run, scoring 10 goals and 21 points in 23 contests.

He’s 34-years-old now, but still an effective offensive weapon. He’ll be a great asset to a Stanley Cup contender – but that won’t be the Philadelphia Flyers. While the Flyers traveled to Ottawa for their game tonight,