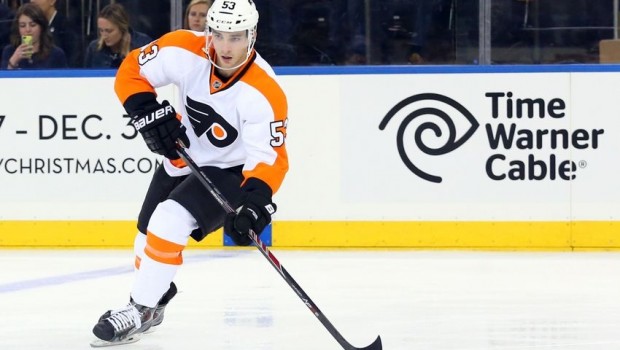 The Flyers are giving up the Ghost.

Perhaps, temporarily, that is.

Flyers fans hoping to see Scott Laughton and Shayne Gostisbehere (photo above) on the opening night roster were disappointed on Wednesday, as the Flyers sent both to their AHL affiliate in Lehigh Valley.

Laughton, the club’s first-round pick at the 2012 NHL Entry Draft, and Gostisbehere — an NCAA standout at Union College, taken in the third round that same year — were considered longshots to make the team. Laughton only has 11 games of professional experience on his resume while “Ghost” has just two, both coming with the Phantoms after winning the Frozen Four a year ago.

Laughton was thought to be the more NHL-ready of the two, and was in the running for Philly’s fourth-line center spot after scoring a goal and three points in four preseason games.

The Flyers also placed tough guy Zack Stortini on waivers for the purpose of sending him to the AHL.

With these moves, Philly’s roster is down to 26 players — one of which is Samuel Morin, the 19-year-old defenseman taken 11th overall at the 2013 NHL Entry Draft. Morin has NHL size (6-foot-6, 202 pounds) and has impressed in the exhibition campaign.