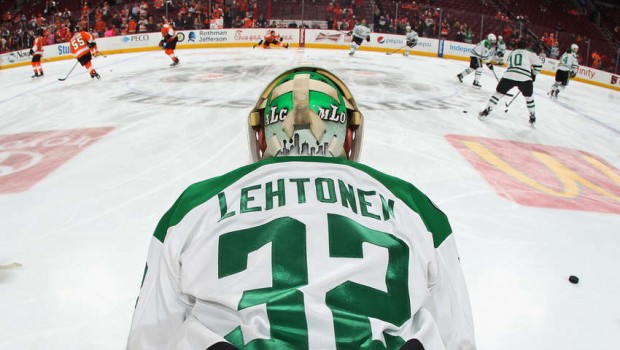 It’s one thing for the Flyers to lose to the Bruins, as they did last Saturday, and the Devils, which beat them on Sunday.

But the Dallas Stars?

Whose goaltender Kari Lehtonen (photo above) had a pitiful record against them — 0-10-3 with a 3.70 goals-against average and .886 save percentage!

That streak ended Tuesday when he made 25 saves to help the Stars to a 2-1 victory at Wells Fargo Center.

The Stars are eight points behind the Winnipeg Jets for the second wild card into the Stanley Cup Playoffs from the Western Conference.

It was Philly’s s third straight loss, and they are nine points behind the Bruins for the second wild card in the Eastern Conference; the Bruins defeated the Ottawa Senators 3-1.

“There’s no desperation,” Mason said. “It’s tough to come in a room after games like that where we just needed to have a much better effort. It just wasn’t there. … I’m embarrassed. I hope everybody else is embarrassed because we have an effort like that at home in situations where we have to come up big and we come up empty. We have to be a lot better.”

Philly had the NHL’s third-best home power play entering the game. In a desperate time there was the expectation the Flyers would, if not score a goal, at least gain momentum from the man-advantage.

“My thought is to get out there and create some momentum for the period,” Flyers coach Craig Berube said. “Shoot pucks, get it set up, get shots through, get shots on the net. You want it to go in, but if it doesn’t, just create momentum.”

Instead the Flyers came away empty, and then Fiddler’s goal put the game away for the Stars.

Ryan Garbutt chipped a puck past Flyers defenseman Carlo Colaiacovo to forward Colton Sceviour. He carried the puck along the right-wing boards and centered the puck to Fiddler, who beat Colaiacovo down the ice and tipped the puck between Mason’s pads.

“It was just a good chip by Sceviour,” Fiddler said. “I just tried to get to the net, create some traffic, get my stick on the ice and lucky enough it went in the net.”

The goal was Fiddler’s third in two games and fourth in four. It was his 11th of the season, tying his career-high.

“Everybody is trying to contribute, and I think [Fiddler] has been doing a great job of late,” Stars captain Jamie Benn said. “He’s a leader on this team and he’s been stepping up his play. Good to see him get that second one there.”

The Flyers got the game’s first goal on Schenn’s shot from the point at 1:13 of the first period, but the Stars answered later in the first when Ritchie beat Mason with a wrist shot from the left hash marks.

Mason was the Flyers’ best player. Early in the second period, he scrambled to make two saves on Ales Hemsky in front. Late in the period he stopped a Jason Spezza blast from the right side, then pushed across to stop Hemsky on a rebound. Then with 1:30 left he stopped Ritchie in the slot and Curtis McKenzie from the side of the net poking at the rebound. He also was good in the third, before and after Fiddler’s goal.

But it’s the sixth time in the past eight games the Flyers have scored two goals or fewer.

“If it weren’t for him, it probably would have been a lot worse,” Schenn said of Mason. “They outshot us and their chances were pretty good. He kept us in there for the most part. Not enough effort for sure.”

As the Flyers’ playoff hopes dwindle, the Stars are continuing to push and hope. They have three games in four nights coming up, starting Thursday at the Carolina Hurricanes, and know every point from now forward is vital.

“We’re still trying to pick up as many points as we can, keep it at least close going into April,” Benn said. “Big two points for our team. We’re happy to get this one.”