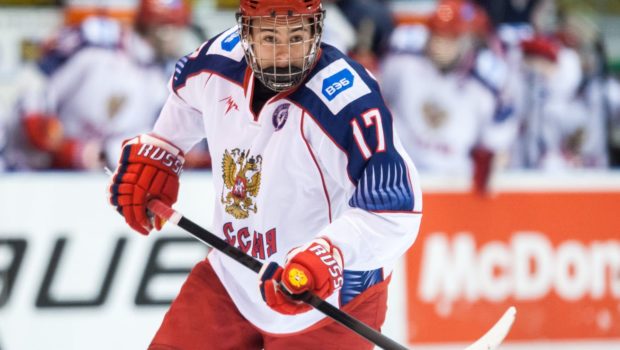 He traded down and got the man they wanted.

The doping scandal in his native Russia probably cost German Rubtsov a couple of sports — the Flyers drafted him at 22.

He might not even have been available at 18, where the Flyers were before they traded back four spots with the Winnipeg Jets.

“I’m not worried that I didn’t go higher,” Rubtsov said through Ken Hoodikoff, one of the Flyers’ overseas scouts who watched him play this season. “I was hoping to be drafted by the Philadelphia Flyers, so everything worked out the way I was hoping.”

Two months ago, the Russian under-18 team was heading to Flyers coach Dave Hakstol’s old stomping grounds at Grand Forks, North Dakota when the entire team was replaced for a doping scandal two days before their departure.

“It’s still hard to understand exactly how it worked out,” Rubtsov said through the translator. “We were caught obviously taking a not-allowed substance and we weren’t allowed to go to the tournament. Obviously everybody was disappointed we couldn’t go, but now it’s over thank goodness.”

The entire team was taking Meldonium, a Latvian-made cardiac drug that the World Anti-Doping Agency added to its banned list on Jan. 1. It’s the same drug that tennis star Maria Sharapova was just banned two years for using.

“We did our research on this kid, trust me,” Hextall said. “Up, down and all around. Inside their country and everything else. We’re convinced that it’s not an issue.”

“No, none of us really knew (what it was),” Rubtsov said. “We had a little glass of juice and some tablets. We were told (by the coaching staff) in the morning, ‘Take this. It’s good for your health.’ Later we found out it wasn’t allowed.”

If it were allowed, Rubtsov’s statistics on the ice would have looked even better. He was considered one of the top players on the Russian team and had 12 goals and 26 points in 28 games for the national team before the tournament.

Hoodikoff said that Rubtsov “probably” would have gone higher if other teams hadn’t been scared off by the scandal. How high?

Hextall was clearly confident he could still get his guy, trading four spots back with Winnipeg and swapping two other picks that turned the Flyers’ third-round pick into a second-round pick. They now have three in the second round heading into Saturday.

“We wanted him,” Hextall said. “It’s always risky, but in the end it was a good move.

“I’m a two-way player and I pride myself on my hard work and playing a two-way game,” Rubtsov said. “I’m a team player.”

Rubtsov has a two-year contract with Vityaz, his hometown team in Russia’s Kontinental Hockey League, but says that his agent, Mark Gandler, is trying to get out of it so Rubtsov can play next season in North America.

“We’re prepared,” Hextall said. “If he has to stay there two years, so be it. If he can come over sooner than that, that’s terrific. We understand all the possibilities and we’re all right with it.

“Our expectations are that he’s going to be there and if he’s not, I’ll be really surprised.”

In the end the move was the best that Hextall said he could hope for. Teams are very interested in second-round picks and now the Flyers have three instead of two.

“I got calls to move up and move back,” Hextall said. “Multiple.”

Moving up was not really an option in his mind. Rubtsov was his guy and the doping scandal doesn’t play much of a role.

All is forgiven for the scandal that might’ve put him higher on a lot of teams’ lists. The NHL understands that it’s not the teenagers’ faults and Hextall clearly believes it also.

“Yes. I think the hockey world does,” Hextall said. “I think everybody understands it. We did more research on this kid than I’ve ever done and really good character. Really good team guy.”