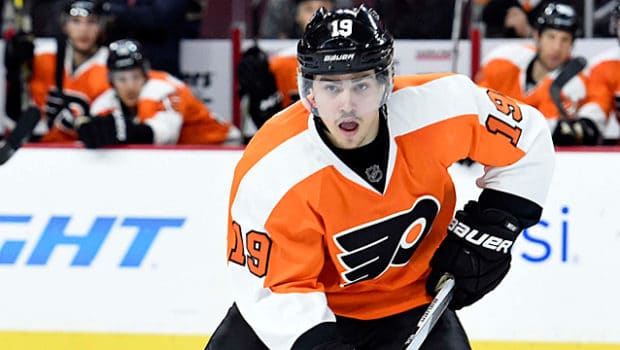 FLYERS-SABRES TONIGHT WITH WILD CARD ON THE LINE!

The Buffalo Sabres and the Flyers are playing what can be considered a playoff elimination game tonight in Buffalo.

Buffalo (27-27-12) is coming off perhaps its most demoralizing defeat of the season.

On Sunday, the Sabres jumped out to a three-goal lead over the defending Stanley Cup champion Pittsburgh Penguins before ultimately falling 4-3 after surrendering two late goals. Giving up late leads has been a major problem for the Sabres ever since returning from their bye week in late February; Buffalo has only one win in its past seven games (1-4-2).

“It’s hard to say one exact reason as to why,” defenseman Josh Gorges said, according to the team’s website. “I believe sometimes when you get a lead, you start to play a little safe. And that’s not how our team is successful. I’m not saying we should go out there and take chances; we don’t need to score another goal to win. We just need to not let them score.

“But we’re good when we’re on the forecheck, we make teams turn pucks over and we get sustained offensive-zone time. When we play back and we get on the wrong side of pucks, we give the team were playing against opportunities and sometimes it just gives them life, it gives them momentum, it gives them a chance to breathe. We can’t allow teams to breathe.”

One positive for the Sabres has been the play of second-year standout Jack Eichel. Eichel is in the midst of a career-best 10-game point streak with three goals and 10 assists.

Buffalo will be without defenseman Dmitry Kulikov, who is out with an upper-body injury. Robin Lehner (.922 save percentage, 2.59 goals against average) has been terrific for Buffalo in recent weeks but has struggled greatly in shootouts; Lehner has yet to stop a shooter in eight attempts this season.

The Flyers (30-26-8) are coming off a 2-1 overtime loss to the Washington Capitals on Saturday. Philly won its previous two games before that, a 2-1 shootout win over Florida and a 4-0 win over Colorado.

The Flyers will leave Buffalo and head to Toronto and Boston to finish their road trip.

“Every game on this road trip is a critical game, so we have to make sure that we take care of our business,” said Flyers coach Dave Hakstol, according to the team’s website. “It’s a next challenge up, really. There’s a lot of challenges ahead, but the next challenge up is the game in Buffalo.”

Jakub Voracek leads the Flyers in scoring with 52 points (17 goals, 35 assists). Goaltender Steve Mason has been hot in recent games and is expected to get his fourth start in a row.