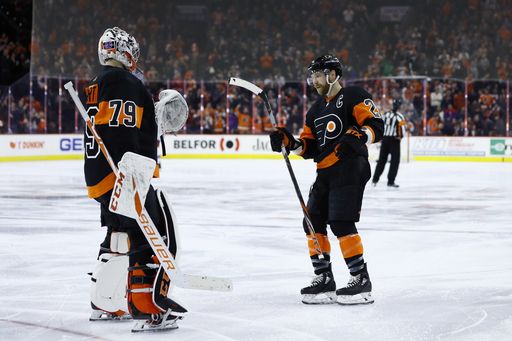 Claude Giroux scored twice and Carter Hart stopped 26 shots to lead the Flyers to their fifth straight win, 5-2 over the New York Rangers.

They moved past Pittsburgh into second place in the Metropolitan Division, and are 23-5-4.

Hart improved to 18-2-2 at home this season; 14-1 over his last 15 starts, and was dominant against the Rangers after he allowed a quirky goal early in the game. Voracek tied a career-high with four assists for the Flyers.

The Flyers were revitalized by first-year coach Alain Vigneault, who coached the Rangers for five seasons and led them to the 2014 Stanley Cup Final, and suddenly seem like a team ready to make some noise in the playoffs. The Flyers missed the postseason last season and haven’t been to the second round since 2012. Hart gives them a chance every night and the Flyers get production from every line.

”We’re not there yet,” Jake Voracek said. ”But I think if we’re going to continue to play the way we do, we can make a run. It comes down to everything. Everything’s got to be clicking. It’s clicking right now. We’ve got to make sure it’s clicking in a month and a half.”

Sean Couturier, James van Riemsdyk and Kevin Hayes also scored to help the Flyers beat the Rangers for the eighth time in the last nine games of the series.

The Rangers’ playoff push suffered a blow when forward Chris Kreider suffered a fractured foot in the first period. He appeared to get hurt when he blocked a shot by Phillipe Myers and could miss significant time. The 28-year-old Kreider just signed a seven-year contract extension reportedly worth $45 million on Monday. Kreider has 24 goals and 21 assists for 45 points in 63 games this season. Kreider was a 2009 first-round draft pick and has played his entire career with New York.

Hart stopped everything and continued to show why the Flyers expect him to play as their franchise goalie for years to come.

”We get those big saves at the right time,” Couturier said. ”They had some good looks early on in the second and he shut the door. He’s a big part of this team and this win.”

Voracek passed from behind the net and fed Couturier for the tying goal late in the first. Van Riemsdyk pounded in a rebound and Giroux scored on a one-timer in the second period to make it 3-1.

Giroux scored his 18th goal of the season, a power-play effort in the third, and Hayes scored against his former team to make it 5-1 and seal the win.

Oskar Lindblom, out indefinitely with a rare bone cancer, posted an Instagram video of the Flyers game on TV with the caption ”Let’s Go.”