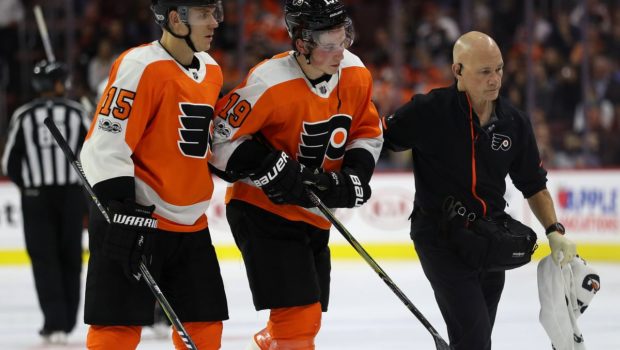 There’s been no officlal announcement, but Flyers rookie Nolan Patrick practiced yesterday and is expected to play tonight at Ottawa after being knocked out of Tuesday’s game against the Anaheim Ducks.

Patrick, the talented center who had three points this season, was checked head-first into the glass by Anaheim forward Chris Wagner, dropped to his knees and needed help leaving the ice.

“Was clean [hit],” Patrick said, according to NHL.com. “I just hit my face on the glass. Happened pretty fast. I’ve got to protect myself better.”

Nolan went straight to the locker room in the second period and did not return. He was in a suit and mingled with the players scratched from the lineup in the press box during second intermission.

The 19-year-old Patrick was the second pick of the 2017 draft and keyed an influx of youth that helped the Flyers get off to a solid start. He missed time in the minors last season and had two abdominal surgeries before being drafted by the Flyers.