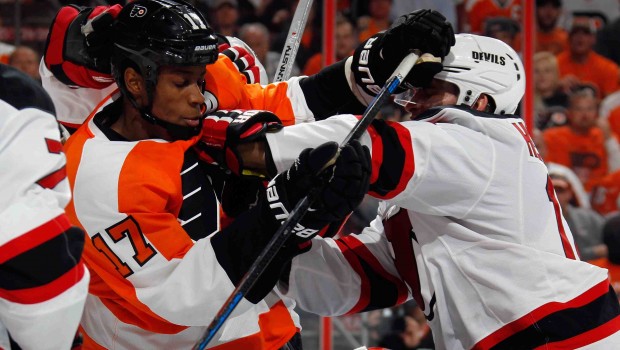 Steve Mason won’t be in Montreal tonight when the Flyers try to extend their winning streak and prevent the Canadiens from taking over the top spot in the Eastern Conference.

Since missing six games with a knee injury, Mason had gone 3-0-1 with a 1.23 goals-against average going into Sunday’s 3-1 victory at Washington. He stopped all eight shots before suffering a knee injury in the second period that will require surgery.

Veteran Ray Emery stopped five of the six shots he saw in relief Sunday and could make his first start since Jan. 27. Rob Zepp went 3-1-0 with a 2.92 GAA in six games before being sent to the minors last month, but he’s injured, so 21-year-old Anthony Stolarz is expected to be called up.

Emery has started both of the Flyers’ games against the Canadiens this season, allowing nine goals on 66 shots as Montreal (34-15-3) won each of them. It scored the first three goals in the most recent one, a 6-3 home victory Nov. 15.

Though Philly already tough road to the playoffs likely gets more difficult with Mason’s injury, the club believes it can continue to play well.

”We’re in a position where we’ve got to win probably 80 percent of our games at this point,” said forward Wayne Simmonds, who has three goals and two assists in five games. ”We’ve put ourselves in this position and we know what we’ve got to do. We’ve done it before and we have full confidence that we can do it again.”

Simmonds scored twice in a 4-3 home shootout loss to the Canadiens on Oct. 11, but was held without a point Nov. 15.

A winner of two straight and seven of nine, Montreal is tied with Detroit for second place in the Atlantic Division, two points behind East-leading Tampa Bay. A victory and a Lightning regulation defeat at Nashville on Tuesday would give the Canadiens the conference lead based on having played three fewer games than Tampa Bay.

Montreal’s surge continued Sunday, with Carey Price making 34 saves and Dale Weise and Max Pacioretty recording a goal and an assist apiece to help complete a season sweep of the Bruins with a 3-1 road victory.

”Who knows what’s going to happen?” coach Michel Therrien said. “We don’t know, but definitely, (sweeping Boston) brings some confidence. But honestly, there’s still a lot of hockey to be played, and we’re still a long way from the playoffs.”

Weise has scored three of his nine goals in two games, and has five points in the last three.

“(Weise) knows he’s going to be the hardest worker out there and at the same time has got an undercover skill set that allows him to make plays for his linemates,” said Pacioretty, who has recorded three goals and four assists in the past six contests.

Weise had two goals and Pacioretty recorded two assists against Philadelphia in November.