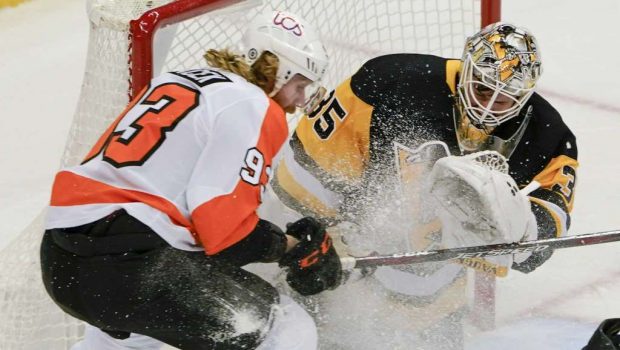 FLYERS ROAD ENDS WITH ANOTHER LOSS TO PENS!

Jared McCann’s rebound goal past Bryan Elliott in the third period gave the Pittsburgh Penguins a 4-3 win over the Flyers, spoiling Philly’s road trip which began with two shutout wins in Buffalo.

The Penguins took two of three from the Flyers this week with McCann providing the difference in the finale when Brandon Tanev’s shot smacked off Elliott’s pad and ended up on McCann’s stick. McCann fired it into the net, then went skates over skull after tripping over Elliott immediately after scoring his fifth of the season.

Zach Aston-Reese, Bryan Rust and Evgeni Malkin also scored for Pittsburgh. Tristan Jarry finished with 19 saves as the Penguins pulled back into a tie with the Flyers in the cramped East Division.

Travis Konecny, Kevin Hayes and Shayne Gostisbehere scored for the Flyers. Elliott made 23 stops but couldn’t beat Pittsburgh for the second time in three days.

They split the first two games — the Penguins winning 5-2 on Tuesday night even with Crosby out due to COVID-19 protocols, and the Flyers 4-3 triumph on Thursday in which the Flyers recovered and at times dominated after spotting Pittsburgh a three-goal lead during a 71-second span in the first.

There was no early deficit this time as they took turns going to the power play and swapping the lead. A turnover by Pittsburgh’s Sam Lafferty created a two-on-none for the Flyers, with Konecny burying a shot into an empty net.

The Penguins responded with a pair of goals with the man advantage. Malkin’s fifth of the season came on a pretty wraparound in which he deked Elliott to his knees, then swooped behind the net to flip it home. Pittsburgh head coach Mike Sullivan has chastised his team for not shooting enough on the power play, but a spectacular passing sequence from Malkin to Crosby to Jake Guentzel to Rust resulted in a tap-in goal that put Pittsburgh up late in the first.

Hayes sniped one past Jarry 1:20 into the second to tie it and Gostisbehere gave Voracek his 500th career assist when his long shot from the point threaded through traffic by Jarry to give the Flyers the lead just past the game’s midway point. Aston-Reese, however, drew Pittsburgh even when his innocuous flick from the goal line in the corner slipped by Elliott to produce another taut third period.