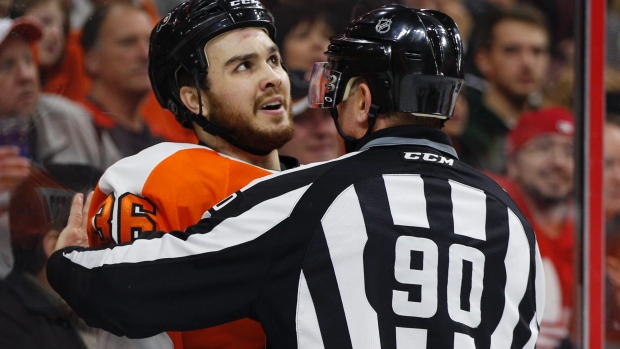 Philly’s fiery forward has been suspended for eight games for an obviously illegal check from behind on Pittsburgh star defenseman Kris Letang in Philly’s 3-2 victory last week over the Pens.

Rinaldo was given a five-minute penalty on the play after he charged towards and then jumped in the air before hitting an unsuspecting Letang who was trying to make a play along the side boards. Rinaldo was also thrown out of the game.

Letang left last week’s contest and did not return. He also sat out the Penguins’ game Wednesday against Chicago.

Rinaldo is a repeat offender. He was handed a four-game ban last April for an illegal check on Buffalo defenceman Chad Ruhwedel.

Rinaldo was also suspended two games in 2012 for an illegal check on Detroit defenseman Jonathan Ericsson.