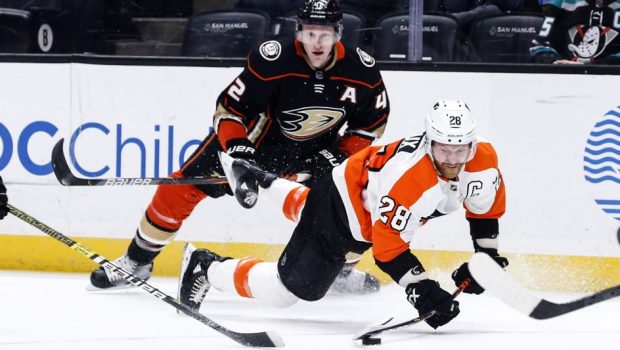 FLYERS RIGHT THEIR SHIP IN OT — 5TH WIN IN LAST 6!

Kevin Hayes scored at 3:53 of overtime and Brian Elliott made 27 saves and the Flyers’ won their fifth IN six games, 2-1 over the Anaheim Ducks.

Sean Couturier scored in the first period and Jakub Voracek had two assists for the Flyer. Elliott won it with a breakaway goal after Voracek made an exceptional pass from deep in their own end, threading it between all three Ducks on the ice.

After Erik Gudbranson scored a fortunate goal for Anaheim in the opening minute, Elliott shut out the Ducks the rest of the way. The veteran goalie came into Honda Center with a dismal 3-8-3 record against the Ducks along with an .880 save percentage, his worst against any opponent.

John Gibson stopped 33 shots for the Ducks, who earned points in consecutive games for the first time since Nov. 27. Two days after returning from the holiday break with a solid 4-3 win over Vegas, the Ducks failed to win their first back-to-back games since Nov. 1 despite an outstanding performance by Gibson.

“He deserves better from us, all the way down through the lineup,” Anaheim forward Devin Shore said. “We had a good push in the third, but that’s no excuse. When a goaltender puts together a performance like that, he deserves much better from his guys.”

Gudbranson put the Ducks ahead just 35 seconds in with a long shot that knuckled under Elliott’s right arm before going off the post and in. The defenseman got his third goal in 28 games since joining Anaheim in a trade with Pittsburgh in late October, nearly matching his career-high of four goals set in 76 games with Florida in the 2014-15 season.

“We did some really good things tonight, (but) we didn’t get enough pucks at the net at the right times,” Gudbranson said. “Towards the end of it, we were a little bit separate and gave them opportunities. It was tough to lose.”

Couturier evened it midway through the opening period when he jumped on the pad rebound of Voracek’s shot and slapped it underneath Gibson for his 10th goal.

The Ducks failed to capitalize on a two-man advantage for 70 seconds early in the third period.