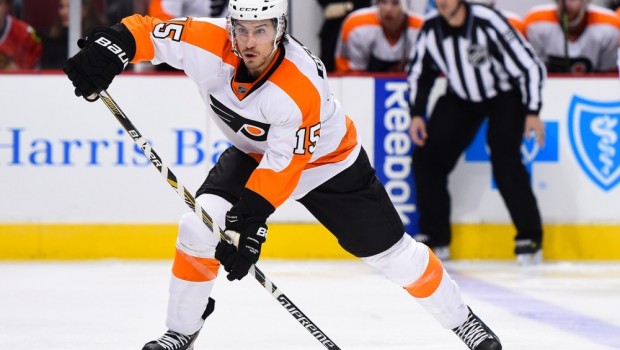 Michael Del Zotto is playing like a man possessed.

And the 24-year-old defenseman is starting to make the Flyers feel better about drafting him first in 2008.

Del Zotto scored his first goal of the season Thursday to help the Flyers defeat the Florida Panthers 4-1 at Wells Fargo Center.

Sean Couturier had a goal and an assist, and Pierre-Edouard Bellemare and Jakub Voracek each scored a goal. Goaltender Steve Mason stopped 34 shots.

The Flyers took a 1-0 lead on Couturier’s goal at 3:53 of the first period, then Del Zotto doubled the lead when he pinched down the weak side, took a pass through the slot from Brayden Schenn and beat Luongo on a sharp angle.

“It’s been something I’ve been working on as far as activating back door,” Del Zotto said. “I’m trying to get in on the rush and get a few looks and have them lose coverage. [Schenn] made a perfect pass and I had an open net and it worked out well.”

The goal was only one part of Del Zotto’s strong game. He had three shots on goal, two hits, four blocked shots and played a game-high 23:18. That includes 3:33 with Philadelphia shorthanded, second on the Flyers to defense partner Nick Schultz.

Del Zotto made his reputation as an offensive-minded defenseman. But with injuries to defensemen Braydon Coburn and Andrew MacDonald, Del Zotto said he’s relishing the chance to reveal another side of his game.

It’s been a steady progression this season for Del Zotto, who is averaging 20:58 of ice time per game but has played more than 23 minutes in five straight games. Del Zotto views every minute he’s on the ice as a chance to prove the doubters wrong.

“It was a tough last season for me and offseason,” said Del Zotto, who was traded from the New York Rangers to theNashville Predators last season and then not tendered a qualifying offer by the Predators, making him an unrestricted free agent.

Del Zotto didn’t find a home this season until the Flyers signed him Aug. 5.

“I said it from Day One: There’s a lot of people doubting me, my ability to play the game,” he said. “Every single day I have that chip on my shoulder trying to prove them wrong.”

“He’s been really impressive,” Mason said. “He’s great at breaking out of the zone. He’s got that offensive talent. What he’s been doing lately is having real strong defensive play. That’s what we need form him right now, to take care of our own zone. He’s stepped up with the minutes he’s been given because of the injuries and he’s made the most of it. There’s no reason for him not to keep going how he’s going.”