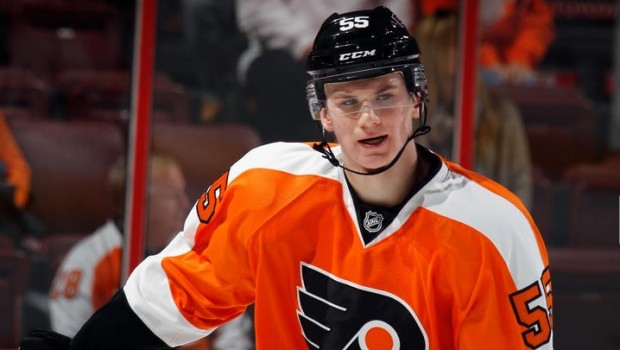 FLYERS REPORTEDLY SHOPPING TO SHORE UP THEIR DEFENSE

No sooner had the Flyers gotten out of their winless jailhouse the other night in Dallas than the rumors resurfaced that the team is desperate for defensive help.

Flyers GM Ron Hextall denies the ongoing trade rumors in Philly, but rumors persist that the Flyers shopping for a deal that would not only bolster their blue line, but maintain Hextall’s long-term vision as well?

Six days before opening night, reports of a trade involving an unnamed Flyers defenseman cluttered the rumor mill. With prospect Sam Morin (photo above) still on the roster, many believed this rumor to hold some sort of credibility. After all, the 19-year-old defenseman impressed his teammates, as well as Flyers coach Craig Berube with his preseason play this year.

“I was impressed in preseason with him, very impressed,” said Berube. “Sometimes you look at a guy in developmental camp and … say, ‘Ah, he’s not ready.’

It made sense, right? Even with Chris Pronger and Kimmo Timonen on LTIR, the Flyers were able to sneak under the salary cap limit, holding only $1.480 million of space. Philadelphia would be able to shave more salary off of their books, while unleashing their 6-7 man child to see just how truly he is ready for the NHL. And if TSN’s Bob McKenzie is reporting it, certainly there has to be some legitimacy, right? No.

It didn’t take but a day for this logic and/or idea to be dismembered. When asked about the rumor, Hextall didn’t waver, asserting his principle in developing prospects at their own pace.

“I believe in what I believe in,” repeated Hextall. “My philosophy won’t change in terms of rushing a young player. We’re not going to keep a kid that’s going to be here 15 years because we think, ‘Wow, it’s nice to have a young kid in the lineup.’ So, any decision that we make on young players is going to be what’s best for the player, because in turn, that’s what’s best for the franchise.”

Never mind the fact that Morin’s contract status prohibits him from skating in the AHL this season, making him eligible for only the QMJHL or the NHL. And while the anticipation of seeing Morin in orange and black continues to build, Hextall and the Flyers would much rather save the first year of his entry-level contract, which would count this season if Morin were to exceed nine games.

As it turned out, Hextall’s dismissal of this rumor held the most credibility. After all, what good does it do the franchise to burn a year of Morin’s contract when the organization has another option that’s just as good, if not better, in Shayne Gostisbehere?

Frank Seravalli of philly.com had this to say:

It is clear that Gostisbehere is the more NHL-ready prospect. For now, it seems like the Flyers have hung on to Morin simply because the more time he trains around NHL players is better for his development than playing in Rimouski, largely unmonitored and out of the Flyers’ control.

With the Morin rumor shot down, it was back to the slightly modified game plan. Even with the early season injury to Braydon Coburn, the Flyers utilized their signed depth in Nick Schultz to fill the gap. But that didn’t extinguish the hearsay surrounding the Flyers’ defensive unit.

Shortly after veteran defenseman Francis Bouillon was released from his professional tryout with the Montreal Canadiens, it was reported that the Flyers extended a contract offer to the 39-year-old defenseman. While the dollar figure went unmentioned, it was noted that the bid was a two-way offer that most likely would’ve landed the 14-year NHL veteran in the AHL.