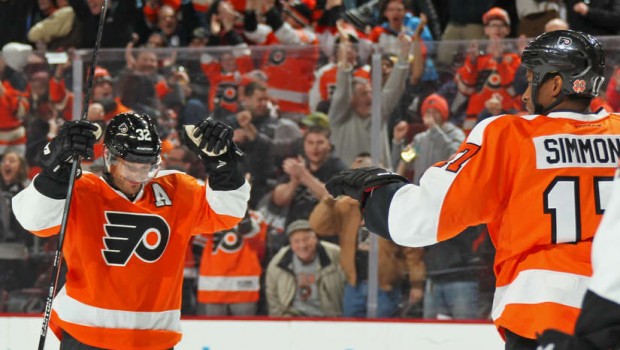 In many ways, Matt Read has been a metaphor for the Flyers’ season.

He suffered a dreaded high ankle strain, which typically costs a few weeks of rehab, last November yet has played every one of the team’s 65 games.

He has gutted it out, sort of how the Flyers have gutted and plodded and crept back into the race for a playoff spot.

Read (right in photo at left) looked like a player going at full strength Thursday night against the St. Louis Blues. He made big plays in the third period to set up Michael Del Zotto for the game-tying goal and Wayne Simmonds (photo above) for the winner 1:50 later in the Flyers’ 3-1 victory.

“I thought he was our best player,” Simmonds said of Read. “He goes out there and makes that first play, fends off two guys in the corner and makes that play up to [Del Zotto], that’s an unbelievable play. Then the patience he showed to find [Mark Streit] coming in late, I thought that was the difference in the game.”

Michael Raffl also had a goal, and goaltender Steve Mason made 28 saves for the Flyers (28-25-12), who are four points behind the Boston Bruins for the second wild-card spot into the Stanley Cup Playoffs in the Eastern Conference. Boston lost to the Calgary Flames 4-3 in a shootout.

Read won a puck battle in the left corner of the St. Louis zone and got the puck out to Del Zotto above the circles. Del Zotto took one stride to his right and sent a slap shot on goal that deflected off Blues defenseman Carl Gunnarsson and past Elliott at 9:47.

Shortly after Del Zotto tied it, Read tipped a loose puck past Blues defenseman Alex Pietrangelo at center ice, got to the puck first and held it on the left side of the St. Louis zone, patiently waiting for support. He found Streit joining the play and got it to him between the circles. Simmonds redirected the defenseman’s low shot past Elliott at 11:37 for his 26th goal, which leads the Flyers, and fifth game-winner.

The key plays Read made Thursday are ones he’s not sure he could have made two months ago.

“You go into a corner and you don’t have that confidence or that strength to even stay on our feet,” he said. “You’ve got one leg at 100 percent and one leg probably under 50 and you’ve just got to go out there and try to do the little things. It was tough to skate out there. This game is a skating game, and once you get the confidence and the strength back, it makes it a lot easier. You’re skating and getting open ice and making plays out there.”

In the past 12 games, Read has three goals and five assists.

Read refuses to blame the injury for his struggles. After scoring 20 goals twice in his first three seasons, the 28-year-old has six goals and 20 assists in 65 games.

“As I look back, every game you come off and you’re doing rehab, you’re doing a lot of extra off the ice to get back to 100 percent,” he said. “I try not to pay attention to that, try not to put any blame on that. It’s hockey; you have to play with your brain and your heart out there. Just that lack of confidence and the injury just takes its toll. But got to put that behind you and can’t blame that at all. You’ve still got to play hockey.”

Read said he’s finally starting to feel like his pre-injury self. Getting a few days off for the All-Star break had him feeling revitalized.

“Right before the All-Star break it started feeling better,” he said. “And the two or three days we had off, (I) didn’t do anything at all; just relaxed and let it heal. It’s amazing what two or three days can do for your body.”

Mason came up big early in the period, stopping Patrik Berglund in the slot three times in a 10-second span.

Elliott played well until the game opened up in the third. His best save came with 9:45 left in the second when he pushed hard to his right to get his arm on a Ryan White chance from the post.

“I felt good the whole game,” Elliott said. “I think when you give up chances like we did, it just takes its toll. It’s inevitable that something is going to happen. It’s unfortunate.”

The Blues finish their five-game road trip Saturday against the Toronto Maple Leafs.

Philly plays Saturday at the Bruins in a game with huge playoff importance. The Flyers said they weren’t watching the scoreboard Thursday, but during Streit’s postgame interview he was dropping his eyes down to watch the Flames-Bruins shootout on a media member’s smart phone.

“They have a good team,” Streit said of the Bruins. “Really good for a lot of years now. We know their style, how they play. … I think it’s going to be a similar game to like tonight. We have to check well, play really well defensively and be patient. Sooner or later we’ll create scoring chances and we want to take advantage of them.”