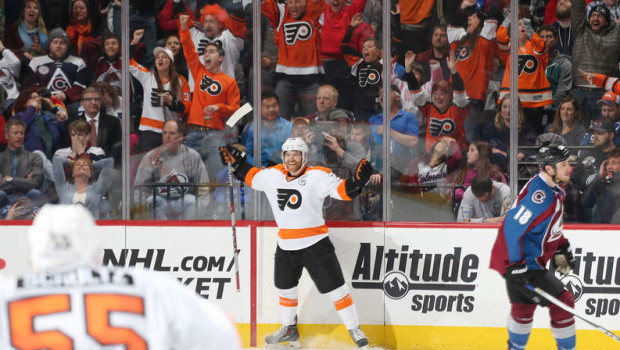 Radko Gudas and Claude Giroux (above) provided the late offense last night, scoring 19 seconds apart late in the third period and the Flyers rallied to beat the Colorado Avalanche 4-2.

Gudas, who had his fifth goal in the past 10 games, fired past Colorado goalie Semyon Varlamov to tie the game at 2-all at the 14:17 mark of the third. Giroux then scored the game-winner at 14:36.

Because of the win, the Flyers remain tied with the Detroit Red Wings for the final wild-card spot in the Eastern Conference.

The Flyers looked sluggish in the opening period, getting outshot 15-7. As the game continued, though, Philly seemed to gradually find its legs before its three-goal outburst.

”We got through (the fatigue),” Flyers coach Dave Hakstol said. ”You saw how short the shifts were, and that’s typical when you come into this building.

”As we got into the second period we got our second wind and pushed the envelope.”

Nick Holden and John Mitchell scored for the Avalanche, who were again without Matt Duchene and Nathan MacKinnon, both out with knee injuries. Varlamov, who sharp for the first 2 1/2 periods, made 41 saves.

Colorado is three points behind the Minnesota Wild for the final wild-card spot in the Western Conference. The Avs will try to close the gap when they host the Wild on Saturday.

”We can’t get too hung up on this game, as much as it stinks,” Avs defenseman Erik Johnson said. ”To let pressure points slip away like that is definitely disheartening.

”You don’t dwell on these things, you have to move on to the next game and that’s what we are going to do.”

The Flyers tied the game at 1-all when Shayne Gostisbehere’s slap shot deflected off Bellemare’s stick into the net at 12:36 of the second period.

Mitchell put the Avs back ahead with a tap-in goal at 6:13 of the third period. But the Flyers answered with two quick goals to pull ahead for good late in the period.

”It was almost as if their goal sparked us,” Mason said. ”It looked like we were struggling a little bit, but the boys responded and really took it to them in the last portion of the game.”

Earlier, Colorado looked to be in complete control, but couldn’t find the back of the net despite a 15-shot first period.

One of its best chances in the period came during a short-handed opportunity, when Gabriel Landeskog and Shawn Matthias both had successive shots stopped. Landeskog then got another, and hit the crossbar.

”I thought we had a bunch of good scoring chances and I felt like we had them on their heels,” Landeskog said of the opening period. ”In the second and in the third, I thought we let up a little too much and gave them too much room.”

Mikhail Grigorenko gave the Avs a 1-0 lead when his chance redirected off teammate Holden’s skate early in the second period.