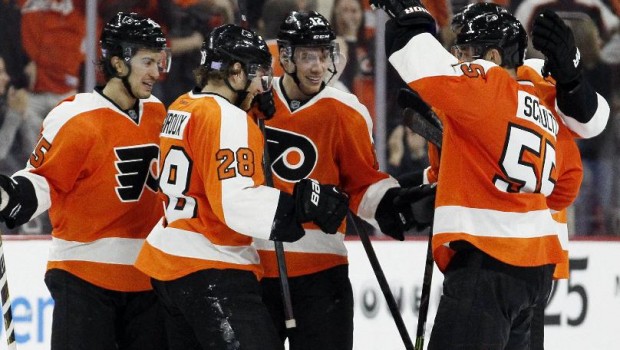 FLYERS PUSH BACK TO KNOCK OFF RED WINGS 4-2

All of a sudden, the Flyers have a power play, and they used it to muscle past the Detroit Red Wings 4-2 Saturday night at the Wells Fargo Center.

Flyers forward Michael Raffl (center in photo above) had the first two-goal game of his NHL career as well as an assist. Defenseman Nicklas Grossmann had a goal, forward Jakub Voracek and defenseman Michael Del Zotto each had two assists and Ray Emery stopped 35 of 37 shots.

Riley Sheahan and Pavel Datsyuk scored for the Red Wings, and Jonas Gustavsson made 13 saves.

The win was the Flyers’ first at home this season (1-1-2). It came after Philly had given away its first three home games in part due to poor third-period efforts.

Against the New Jersey Devils on Oct. 9 the Flyers battled back from a 3-0 deficit and were tied 4-4 before giving up two late goals; they blew a 3-0 two-period lead against the Montreal Canadiens on Oct. 11 and lost in a shootout; and they rallied from 2-0 and 3-2 deficits against the Anaheim Ducks on Oct. 14 only to again lose in a shootout.

This time, the Flyers had the better of the play in the third.

The teams traded goals early in the period before the Flyers took advantage of a penalty on the Red Wings’ Niklas Kronwall to get the game-winner. Voracek had the puck above the right circle in the Detroit zone and found Schenn in the high slot. Schenn shoveled the puck at the net and through a Wayne Simmonds screen for his second of the season.

The goal snapped the Red Wings’ streak of successful penalty kills to start the season at 24. Entering the game Detroit was the only team in the League that had not allowed a power-play goal this season.

“You just grind them out on the power play,” Schenn said. “They got a little bit tired. Just put my stick on the ice for a high tip and Jake hit it. Definitely take those goals.”

Raffl closed the scoring with an empty-net goal with 30.1 seconds remaining, capping a third period that saw the Flyers put nine shots on goal, one more than they had in the first two periods combined.

“I think we finished the game way better than we started it,” Grossmann said. “That’s something we’ll take with us. We have things to clean up from the first two periods defensively, start building from there.”

Teammates credited Grossmann’s goal, which came with 1:39 left in the second period, as the spark that turned them around. It came at the end of a strong shift by Raffl and Chris VandeVelde that saw them hold the puck deep on the right side of the Detroit zone. All five skaters were watching VandeVelde, which allowed Grossmann to sneak through the backdoor and one-time VandeVelde’s sharp pass out of the corner past Gustavsson.

“There was kind of a scrum in the corner and I saw my winger didn’t really have his head on a swivel, so I snuck behind him and [VandeVelde] just hit me with a great pass,” Grossmann said. “Open net, so I just had to put my stick on there.”

It was the sixth goal of the defenseman’s 471-game NHL career.

“Grossmann’s goal ignited us a little bit,” Schenn said. “Gave us a little spark and that’s what we needed. Big goal by him to get us back in the game.”

The other spark came from Emery, who didn’t have to make too many outstanding saves but was the reason the game was 1-1 after two periods despite the Red Wings outshooting the Flyers 24-8.

“If it wasn’t for Ray I don’t think we’d be talking about a win right now,” Schenn said.

Emery had little chance on the two goals he did allow. In the first period Andrej Nestrasil bulled through two Flyers to get to a puck in the Philadelphia end and threw it back to an open Sheahan in front for his first of the season. In the third, 42 seconds after Raffl’s goal had given the Flyers a 2-1 lead, Darren Helm caused a turnover at the Philly blue line and split two defenders with a pass to a wide-open Datsyuk for his first of the season.

“[Emery] had to play strong for us,” Schenn said. “We relied heavily on him. We couldn’t get anything going, couldn’t sustain any offensive pressure. They kept coming at us. That’s the result of us not skating, moving our feet and giving the puck right back to them. That forced us to play a lot of hockey in our own end [Saturday], especially in the first 40 minutes. [Emery] was sold again.”

Red Wings coach Mike Babcock didn’t have much to criticize his team about.

“I thought we played a great game,” Babcock said. “Even in the third period we had lots of opportunities. We didn’t score. We did lots of really good things. We had a breakdown when Grossmann scored his goal, and one off the rush. You’re going to have breakdowns in games … that’s the way it goes. But I thought we did tons of good stuff. We obviously have to get our power play going. Our power play wasn’t good enough, even though the first one we kept them in there the whole two minutes, I didn’t think that was giving us any life. Other than that we played a good game. You play like that most nights you’re going to win.”

The Flyers know they were lucky to leave Wells Fargo Center with two points.

“Good to see us win the game for sure and play our best period of the game [in the third],” Flyers coach Craig Berube said. “We didn’t play a very good game, but two points is two points.”