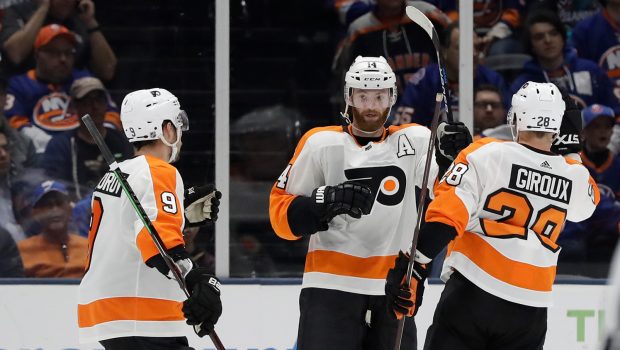 FLYERS PUNCH OUT ISLES: 5 PTS. OUT OF WILD CARD WITH 14 TO PLAY!

James van Riemsdyk had a goal and an assist as the Flyers beat the Isles 5-2.

Ryan Hartman, Sean Couturier, Nolan Patrick and Travis Konecny also scored and Brian Elliott made 25 saves for his 10th victory of the season.

“I thought our guys really played well defensively,” Flyers coach Scott Gordon said. “The game that we played here last week I think we got lucky in the second period a few times, but tonight this was probably one of our better defensive games. . With the exception of the last two plays at the net at the end of the game there, we had guys that were able to stop them from getting shots off.”

The Flyers are seven points behind Pittsburgh and five behind Columbus and Montreal for one of two wild-card spots in the Eastern Conference.

The Flyers are 6-3-1 in their last 10 games, which includes wins over the Islanders and Penguins.

“We were really good defensively,” Jakub Voracek said about the Flyers’ effort. “We didn’t give up much. We eliminated their speed through the neutral zone.”

Scott Mayfield and Nick Leddy scored for New York, and Thomas Greiss made 10 saves but gave up all five of the Flyers’ goals in 39:56 of action. Christopher Gibson made his first appearance since Dec. 6 in relief of Greiss in the third period and stopped 10 shots.

Van Riemsdyk scored with 3.1 seconds left in the first period to break a 1-1 tie. The Flyers forward was left alone in front of the net to clean up a puck that was initially stopped by Greiss.

Philly extended its lead to 3-1 at the 1:34 mark of the second period. Couturier fired a hard shot from the top of the left faceoff circle for his 28th goal of the season.

Mayfield gave the Islanders a 1-0 lead at the 6:30 mark of the first period after his shot was deflected into the net by the stick of Corban Knight. The goal was Mayfield’s first since Nov. 18 against Dallas.

The Flyers evened the score on Hartman’s goal at 15:20 of the first. Ivan Provorov threw the puck at the net and Hartman was able to push the rebound by Greiss.

Islanders defenceman Johnny Boychuk left early after being hit up high by Voracek. Boychuk was attended to on the ice for several minutes by a team trainer before going to the dressing room.

As Boychuk was leaving the ice, he motioned at Voracek.

“He’s getting off the ice and pointing at me like it’s Wrestlemania,” Voracek said. “Give me a break. We’ll see what happens next game.”