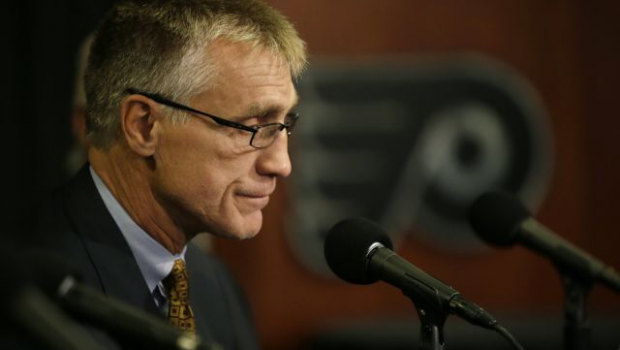 The Flyers Paul Holmgren has been shoved aside as president of the team and will become senior advisor to Dave Scott, Comcast Spectacor Chairman and CEO, and to Flyers general manager Chuck Fletcher.

Holmgren, who has been president for five years, will support the team’s leadership in this new role, utilizing his unparalleled level of experience and strong relationships throughout the league.

Under the new leadership structure, Fletcher becomes president of hockey operations and general manager for the Flyers, and now reports directly to Scott.

“It’s been an honor to serve this franchise in many different roles throughout my life and I look forward to this next chapter,” said Holmgren. “I approached Dave about my idea to step aside to spend more time with my family. I have complete confidence in Chuck in his new role, leading the Flyers to great things. The Flyers have given so much to me and my family over the years, and I have forged life-long friendships with the many players, coaches, employees and fans who have helped me make Philadelphia home for over 40 years. I would like to thank Dave and Chuck for their efforts to lead this franchise into a bright future and for their continued confidence in me as I take on this new role.”

Holmgren was part of five Flyers Stanley Cup finalist teams – twice as a player (1976, 1980), once as an assistant coach (1987), and two more in the front office in 1997 and 2010. As general manager in 2009-10, Holmgren saw his team make one of the most remarkable runs in franchise history by qualifying for the playoffs on the last day of the season before dispatching New Jersey, Boston and Montreal in the Stanley Cup Playoffs to reach the Final against the Chicago Blackhawks. The Flyers followed up that season with a 47-win campaign and a division title in 2010-11, and again posted a 47-win season in 2011-12 after Holmgren dramatically reshaped the team’s roster during the offseason. Those two seasons marked the franchise’s most wins in a two-season period since 1985-87.