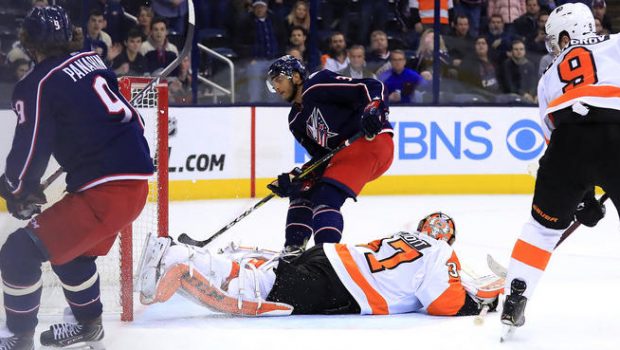 FLYERS READY FOR RE-START, BUT THERE’S A TURD IN NHL PUNCH BOWL!

As the Flyers and the rest of the NHL prepares to re-start their season, there’s a turd in the punch bowl.

New York Rangers star Artemi Panarin (above) says that if the NHL and the NHLPA can’t agree on a fix for the league’s financial system, then players should not report to training camps.

“For nearly two decades, the players have protected the owners’ income with escrow, including throughout this pandemic crisis, even as owners’ equity continues to grow exponentially,” Panarin said yesterday in a statement posted to social media. “It is time to fix the escrow. We as players cannot report to camp to resume play without already having an agreement in place. We are all in this together.”

Panarin had 95 points in 69 games in his first season with the Rangers, with whom he signed a seven-year, $81.5 million free-agent contract last summer. He is the most prominent player to speak out against returning to training camp without a fix to the escrow system.

The current financial system in the NHL involves a 50/50 split in revenue between the players and owners. The escrow system, which calls for a percentage of withholding from players’ paychecks each season, maintains that balance by either funneling money back to the owners in the case of a revenue shortfall, or having it refunded to the players.