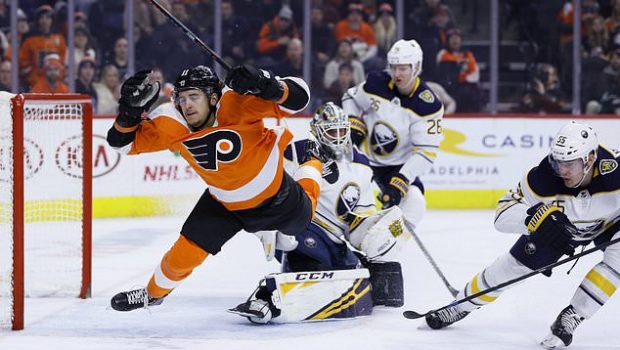 The Buffalo Sabres didn’t have their best player and the Flyers pounced last night at the Wells:

James van Riemsdyk score twice and the Flyers take advantage of some sloppy defense and a strong power play to beat the short-handed Sabres 6-1.

Jack Eichel, who has 24 goals and 50 points in 35 games, warmed up but was being scratched just 10 minutes prior to face-off with an upper body injury. Sabres head coach Ralph Krueger would not elaborate on the extent or cause of Eichel injury during his post-game press conference.The night got worse from there for Buffalo, who deflected three shots past goaltender Carter Hutton to assist the Philadelphia rout.

Van Riemsdyk bagged his second two-goal game of the season. Mikhail Vorobyev, Matt Niskanen, Ivan Provorov and Tyler Pitlick were credited with goals for the Flyers who put 29 shots on Hutton in the victory.

On the opposite end, Flyers goaltender Carter Hart saw light action during a 16-save performance.

Victor Olofsson added his 15th goal midway through the third period for the Sabres, preventing the shutout. Hutton finished with 23 saves.

Philly scored three times in a four-minute stretch midway through the first period. Vorobyev´s centering pass to a cutting Shayne Gostisbehere hit the stick of Connor Sheary – the late addition to the Buffalo lineup when Eichel was scratched – before sliding into the right side of the net for a 1-0 Flyers lead.

Van Riemsdyk made it 2-0 when he was able to bounce the puck off his skate and into the empty side of the net. After a failed challenge by Krueger for goaltender interference on the van Riemsdyk goal, Niskanen added a power-play tally a minute and a half later when he found an open net on a one-timer following a drop pass from Kevin Hayes.

“That was a huge point in the game for us,” Flyers coach Alain Vigneault said.

Provorov added a second power-play goal on a wrist shot from the point, scoring past a screened Hutton. A minute later, Pitlick was credited with his third goal of the year when Sabres defenseman Henri Jokiharju deflected a rebound back into the net with his stick.

Van Riemsdyk´s second goal was the third Philadelphia power-play goal of the game, deflecting off the skate of Sabres defenseman Rasmus Ristolainen.

“I think both my goals weren’t even shots on net,” Van Riemsdyk said. “So just funny the way things go like that sometimes. I think our line the last few games has done a good job of playing off each other. It seems to be some good chemistry there. We’re spending some good time in the offensive zone and getting a lot of time down there. And try to make some plays and make some simple plays at the net. I think we’re getting rewarded for some of those.”