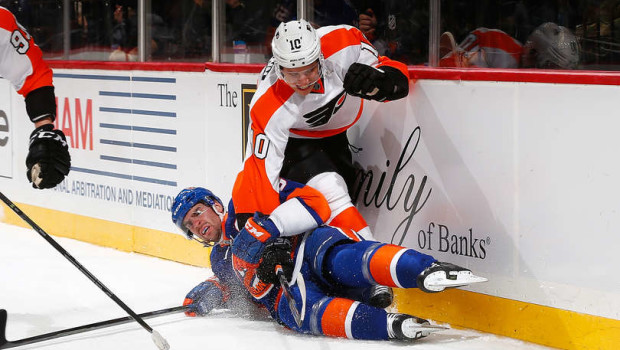 It was a lost night in Brooklyn for the popgun-offense Flyers.

The energized New York Islanders got goals by Kyle Okposo, Casey Cizikas and Frans Nielsen and defeated the Flyers 3-1 at Barclays Center.

Cizikas tied the game with a shorthanded goal late in the first period and Okposo put New York ahead early in the second.

Jaroslav Halak made 17 saves for the Islanders (11-8-3), who limited the Flyers to four shots in the third period before Nielsen hit the empty net with 1:09 remaining for his ninth of the season.

“Those games are fun,” Cizikas said. “When they get testy like that, when they get physical like that, that’s what makes the game of hockey so much fun. I think we thrived off of that tonight.”

Claude Giroux had a first-period power-play goal for the Flyers (7-10-5), and Steve Mason finished with 33 saves to keep the Flyers in the game. They had a total of 10 shots on goal in the final two periods and haven’t scored an even-strength goal since midway through the third period of a shootout loss to the Los Angeles Kings on Nov. 17. They’ve scored four times in four games since, three times on the power play and once shorthanded.

“We competed in all areas. We competed hard tonight,” Flyers coach Dave Hakstol said. “No lack of compete. … [We] have to find a way to do more in the area of 5-on-5.”

The Islanders and Flyers combined for 44 penalty minutes and 67 hits. There were two fights and numerous post-whistle scrums.

“[We played] with a little feistiness against a good team,” Islanders coach Jack Capuano said. “They played hard, they were well-prepared, they played hard and their goalie played extremely well. It was a battle for 60 minutes.”

Okposo put the Islanders ahead for the first time at 5:14 of the second period with a superb individual effort. After John Tavares won an offensive-zone faceoff, Okposo controlled the puck in the left corner, worked his way into the lower left circle and surprised Mason with a shot that went through the legs of defenseman Nick Schultz and went high into the short side. It was Okposo’s fifth goal and extended his point streak to six games.

The Islanders, who surrendered three power-play goals on five opportunities to the Montreal Canadiens on Sunday, allowed the Flyers to take the lead 12 seconds into their first man-advantage. With Josh Bailey off for goaltender interference, Giroux stationed himself in the left circle and one-timed a pass from Shayne Gostisbehere past Halak at 3:59 for his team-high eighth goal of the season.

But the Islanders penalty killers redeemed themselves by scoring a shorthanded goal with 57.7 seconds remaining. Cal Clutterbuck picked up a loose puck at his own blue line, raced into the Philadelphia zone and cut toward the net. The puck bobbled and appeared to hit Gostisbehere’s skate, then came to Cizikas in front of the net. He beat a defenseless Mason for his third of the season and a 1-1 tie after one period.

“[Clutterbuck] made an unbelievable play,” Cizikas said. “I don’t know what he did on the wall to get around that [defenseman], but he kind of froze him and took it to the net. It just happened to go on my stick and I just took a whack at it.”

“We can’t give up those goals,” he said. “We have to find ways to prevent the shorthanded goals from coming because they take the momentum away from you.”

Mason kept the Flyers in the game in the third, when the Islanders outshot the Flyers 15-4, but Philadelphia generated little offensive pressure before Nielsen’s empty-net goal.

Capuano was delighted with the Islanders’ ability to close out the game.

“I thought we played pretty well in the third period. We managed the puck, and any time you manage the puck you give yourself a chance to win the game,” he said. “We were in attack mode, and that’s what we need to do.”

For Giroux, the outcome was another example of the Flyers’ lack of consistency.

“The day we start playing 60 minutes like that, we’re going to be dangerous,” he said. “Now we’re just inconsistent. It’s the same story every game. We need to find a way to be consistent the whole game.”