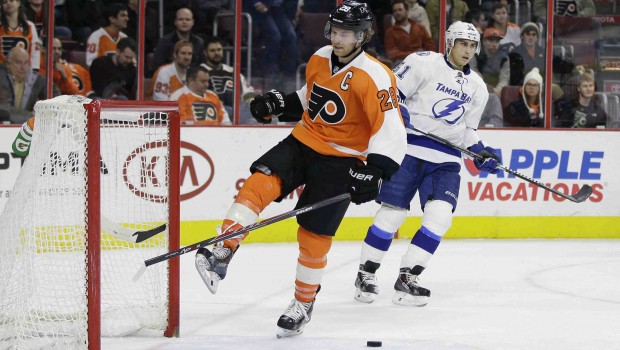 The Flyers have beaten a lot of also-rans lately as they push to make the playoffs, but tonight they face a white-hot team at the Wells.

The Tampa Bay Lightning try for a 10th consecutive victory and seventh in a row away from home while trying to spoil the finale of the Flyers’ successful home stand.

Tampa Bay (39-22-4) needed a comeback to set the team mark with a 4-3 overtime victory over Carolina on Saturday. Tyler Johnson got the tying goal with 6:18 remaining in regulation and Alex Killorn scored in the final minute of the extra period.

The first-place Lightning can now equal their best road win streak, established Jan. 7-Feb. 1, 2007. They can also add to a two-point lead over Florida and three-point advantage over Boston in the Atlantic Division.

The Lightning topped the Flyers 3-2 in overtime in the season opener for both clubs Oct. 8 at Tampa. Ben Bishop stopped two penalty shots – one in OT – and paved the way for defenseman Jason Garrison to net the winning goal, his second of the game.

The Flyers bounced back from a 4-0 defeat to Edmonton on Thursday with a 6-0 rout of Columbus on Saturday, giving them a 4-1-0 mark on their six-game home stand and a sixth victory in nine contests overall.

“I think we all knew what we needed to do to win this game. We had our mindset on the right things,” he said. “I’m glad we turned it around that fast. I’m glad we got the two points.”

Gudas will face his former team for the first time. He was a healthy scratch in the season opener.

Forward Wayne Simmonds has four goals and two assists in his last six matchups with Tampa Bay, while Flyers leading scorer Claude Giroux has one goal and nine assists in the past eight meetings.

Lightning star Steven Stamkos has recorded 10 goals and four assists in his last 10 games against the Flyers. Valtteri Filppula has three goals and 10 assists in a 10-game streak versus the Flyers.