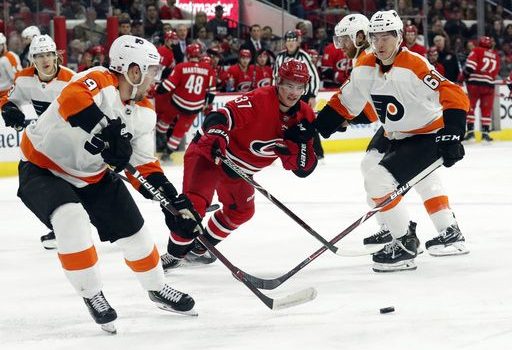 Teravainen scored on the power play, ending a nine-game stretch during which the Hurricanes failed to score with the man advantage. Carolina later got another power-play goal from Justin Faulk, and Jaccob Slavin’s short-handed, empty-net goal put the game away.

”Special teams, we know how important they are, and (today) that was the difference, really,” Hurricanes coach Rod Brind’Amour said.

Petr Mrazek made 30 saves for Carolina, which is in position for the first Eastern Conference wild card. The Hurricanes increased their lead to three points over Montreal and Columbus, both of which were playing Saturday night.

Seeking its first playoff appearance since 2009, Carolina also pulled within two points of Pittsburgh for the third playoff spot in the Metropolitan Division and could tie the Penguins in the standings with a win Sunday in Pittsburgh.

”Everyone likes the meaningful games and meaningful situations,” Hamilton said. ”I think everybody in here will tell you that’s why we play. You want to play in these games and play in the playoffs.”

Claude Giroux and Oskar Lindblom scored and Cam Talbot made 27 saves for Philly.

For a two-month starting in mid-January, the Flyers were one of the hottest teams in the NHL as they went on an 18-4-2 run to work themselves back into the playoff picture. But Saturday’s loss dropped them to 3-6 in their past nine games.

”Right now we’re in position, obviously, that we’re not making the playoffs,” Flyers coach Scott Gordon said. ”We just have to find a way to play the games the right way, and finish the year out doing the right things.”

The Flyers got off to a good start against Carolina, though, as Giroux opened the scoring with 7:55 remaining in the first period off a pass from Corbin Knight on a 2-on-1 break. It was Giroux’s 21st goal of the season, breaking a 10-game goal-scoring drought.

The Hurricanes struck back quickly. Teravainen scored with 6:25 remaining in the period when he converted a rebound after Justin Williams powered to the net and tried to jam in a shot from the goalmouth.

”Up until they scored, I thought we had done a pretty good job on the penalty kill,” Gordon said.

Another rebound goal put the Hurricanes ahead 2-1 as the puck pinballed to Hamilton for an easy shot into the short side of the net. It was Carolina’s quickest two-goal spurt since Williams and Micheal Ferland scored 8 seconds apart on Nov. 18 in a 2-1 win over New Jersey.

Faulk’s power-play goal with 8:03 left in the third period increased Carolina’s lead to 3-1, but Lindblom responded with a goal on the man advantage 1:15 later. After Slavin’s empty-netter, Brock McGinn added another.

The Hurricanes had lost three of five before Saturday. They have four games remaining.

”It doesn’t get easier,” Brind’Amour said. ”We know that. It gets tougher and tougher, but that’s great. That means we’re playing meaningful games, and that’s why you do this.”