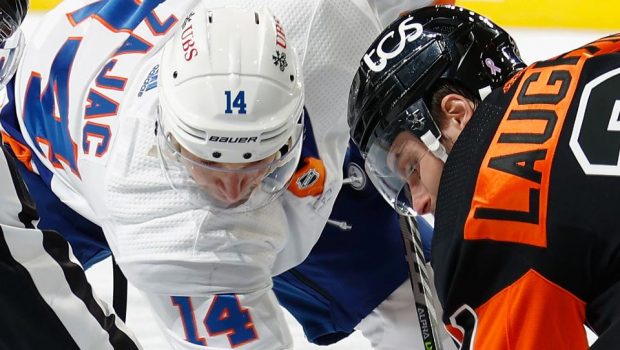 FLYERS PLAY THEIR ASSES OFF, LOSE AGAIN, 9 PTS. OUT OF PLAYOFFS!

The Flyers have been playing listlessly lately.

But last night’s effort against the Isles at the Wells was a happy exception.

They played their asses off.

And still they lost, pushing them 9 points behind Boston for the last East division playoff spot.

Nick Leddy scored 2:23 into overtime and Ilya Sorokin made 30 saves for the 1-0.

After both goalies were stellar throughout the contest, Leddy scored a fluke goal when his backhand pass went off the stick of Flyers defenseman Travis Sanheim and through the legs of goalie Brian Elliott.

“I think it was more of a fortuitous bounce than anything,” Leddy said.

The victory sent the Islanders past the Pittsburgh Penguins into second place in the East Division. New York is two points behind first-place Washington.

“We weren’t as sharp as we needed to be,” Islanders coach Barry Trotz said. “But at the end of the day, a huge two points. Huge.”

Elliott made 27 saves, including several stellar stops late in the third period.

Jordan Eberle and Jean-Gabriel Pageau assisted on the game-winner that ended a long scoreless drought. The Islanders hadn’t scored since early in the second period two games ago, a span of 159 minutes, 27 seconds of game time.

Sorokin improved to 5-0-1 in six games, five of which were starts, against the Flyers.

“I felt good,” Sorokin said. “I think about what I should do in the moment and don’t think about results and not what (happened) a few games ago.”

He kept the Islanders in the game with 23 saves through the first two periods, including several quality chances. His sprawling glove save on Travis Konecny’s great chance was a highlight of the second, following several strong stops late in the first that also included a denial of Konecny.

“We don’t win that hockey game if he doesn’t have that first period,” Trotz said. “We were slow out of the gates, we weren’t sharp, we weren’t committed to the battle. You need your goaltender to sometimes steal us a game; he stole it in the first for us.”

Said Flyers coach Alain Vigneault, “The first and second periods, we had some great looks. Their goaltender made some real big saves at the right time. In my estimation, we had enough looks in those two periods to get a couple.”

The Islanders found their offense late in the third, but this time Elliott was up to the task.

After a good pad save on Casey Cizikas, Elliott denied Kyle Palmieri with a glove stop with 7:11 remaining in regulation and snared Andy Greene’s hard slap shot 31 seconds later.

Both goalies came up big in overtime, with Sorokin using his pad to deny Ivan Provorov 23 seconds into the extra session and Elliott keeping Brock Nelson’s backhander out of the net with an excellent save.